I have been watching Netflix quite a bit the last few months and have watched all available seasons for a couple of shows. After I finished another series, a suggestion came up for a show called the "American Bible Challenge." It sounded interesting, so I started watching it.

The show starts out with three teams of three members each. They are asked questions along the way and earn points for correct answers. Eventually, the teams go down to one player and the two top scoring teams go on to the final challenge. 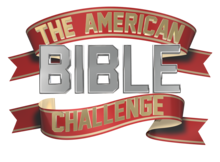 In this last contest, the players are given a subject followed by ten minutes of "good old fashioned Bible study." Finally, the teams are asked questions, one player at a time, and they see who can get the most correct answers in one minute. The winning team receives $20,000 for a charity and return for the semi-finals. If this is won, the charity receives an additional $20,000 and a chance in the finals. Winning everything grants another $100,000 to the team's charity.

Over about two weeks, I watched both seasons available on Netflix. For most questions, I could get the right answer before the team replied, especially in multiple choice. The second season added a few physical challenges as well, but I still got most questions. My main day helper got most of the answers as well, so we just need a third team member and we're ready to play.

The stage didn't look very wheelchair friendly, but I imagine it could be adjusted. I think it would be fun to play something that is great to study. Choosing a charity could be difficult since I can easily think of five I would love to see the money go toward.

Unfortunately, with the challenges of the quad life and reality getting in the way, I doubt it will ever happen. In any case, it was fun to test my knowledge and see the contestants succeed. Maybe sometime I'll get to try it, but until then life goes along as God has planned.
Posted by trainman at 2:29 PM