Some weeks, everything goes right, but others are just the opposite. Last week seemed to be a lot of the latter.

After over four years of work and waiting, my new chair arrived last Tuesday. Unfortunately, we should have left it in the crate. It didn't have several of the items it was supposed to, won't fit me, and a long list of problems. After a little investigation, I also found out the base was purchase in 2009 by a company in Florida. The on switch is missing, so I can't tell how many miles it has driven, but it has definitely traveled the country.

I also had a miscommunication with a client a couple weeks ago and I ended up overwriting changes they had made. Last week was spent getting the original changes online again along with the changes I made. Now we're working to get everything correct on the client's computer again so they can continue doing updates. Normally, I'm able to get updates complete for clients within one business day, but not last week.

With the catching up on the one client and still being flat a lot, I let an update request get buried in my email. It was two days later when the client reminded me of it that I finally got it online. I'm supposed to be trying to get more clients so I can help with insurance expenses, not lose current ones because of poor management. Mom also said that if I can't get on my own insurance with nursing coverage in January that I'll need to just go to Medicaid and see what we can do. That will very possibly mean a care facility. With the negative, their also was some positive.

Tuesday also had an interview with a potential new client. If they decide to go with me, it should be a fun site to work on. I also started back into Spanish after more than a year off. I've wanted to for a couple months, but finally took the initiative and did it.

Other than warm, this new week has potential to go either direction. We'll see what it brings by the next post.
Posted by trainman at 3:35 PM No comments:

Last week I said that I have been noticing fewer intrigued looks when I'm out in places like the state fair. That is the case, but this past week has had more of a twist on that.

We were given a few free tickets to the fair after our initial visit, so dad and I went up again late Wednesday afternoon. The evening crowds are generally much smaller than the day and it makes for easier viewing of displays, and shorter food lines. After eating a hard-broiled egg that one egg exhibit was handing out, we stopped by a greenery display so dad could stop and help feed me ice cream (did I mention the Iowa State Fair is known for food?). A mother and, I'm assuming, son sat nearby us for a rest and to wait on other kids.

A short time later, the boy started asking me questions, why was I in a chair and how did I drive it. Very typical questions from a kid, but it had been a while since anyone had approached me in public with questions. After finding something for supper, dad and I wondered over to where my uncle was stationed on the fairgrounds selling farm equipment and a grill called the green egg. We sampled some pizza that had just come off of an egg and the son of my uncle's coworker walked around trying to see what he could do for entertainment. Sure enough, after I had been there a few minutes, he asks about how I drive my chair.

Both of these boys looked to be around the age I speak to at schools, so a couple quick questions were easy to answer, but the public wasn't finished. Thursday, I had an afternoon doctor's appointment in Iowa City, so my assistant and I left early to get lunch somewhere. We arrived in town with plenty of spare time, so in a rare event, we both got out of the van and went into the restaurant to eat. We're usually pressed for time to either get to the appointment or get home, so we normally go through the drive-up window and eat in the parking lot.

My inexperience showed as I initially went to the wrong end of the line. As the person built the sandwich I normally order at this popular sub shop, I actually had to think about choices of what to put on. Most of the time, often on weekends, mom and I give our order to dad and he returns with our sandwiches. Actually seeing the choices and knowing what to have was a nice change. Shortly after the sandwich build, we were at the designated wheelchair table munching on flattened bread. A few minutes later, a mom with three young girls sits in the booth adjoining ours.

The middle girl, probably around age five, asks her mom to see why I'm in a wheelchair. As best I could in a booth I gave a very brief history and wheelchair demo. In two days, I had more questions in public that I've probably had in a few years.

People with spinal cord injuries (SCI) are becoming more common in my area. A young man of 15 was injured this spring and came home to a neighboring town a few weeks ago. While he was at rehab near Denver, they met another family from my town whose son had just been injured. He is scheduled to return home later this week. Both of these injuries are fortunately lower levels than mine with one having some arm control and the other at least partial leg control. What the short- and long-term future is for these two will remain to be seen. In any case, kids will have more opportunity to ask questions and learn about the quad life.
Posted by trainman at 5:23 PM No comments:

Labels: giving back, helping others, life as a quadriplegic, living in a society 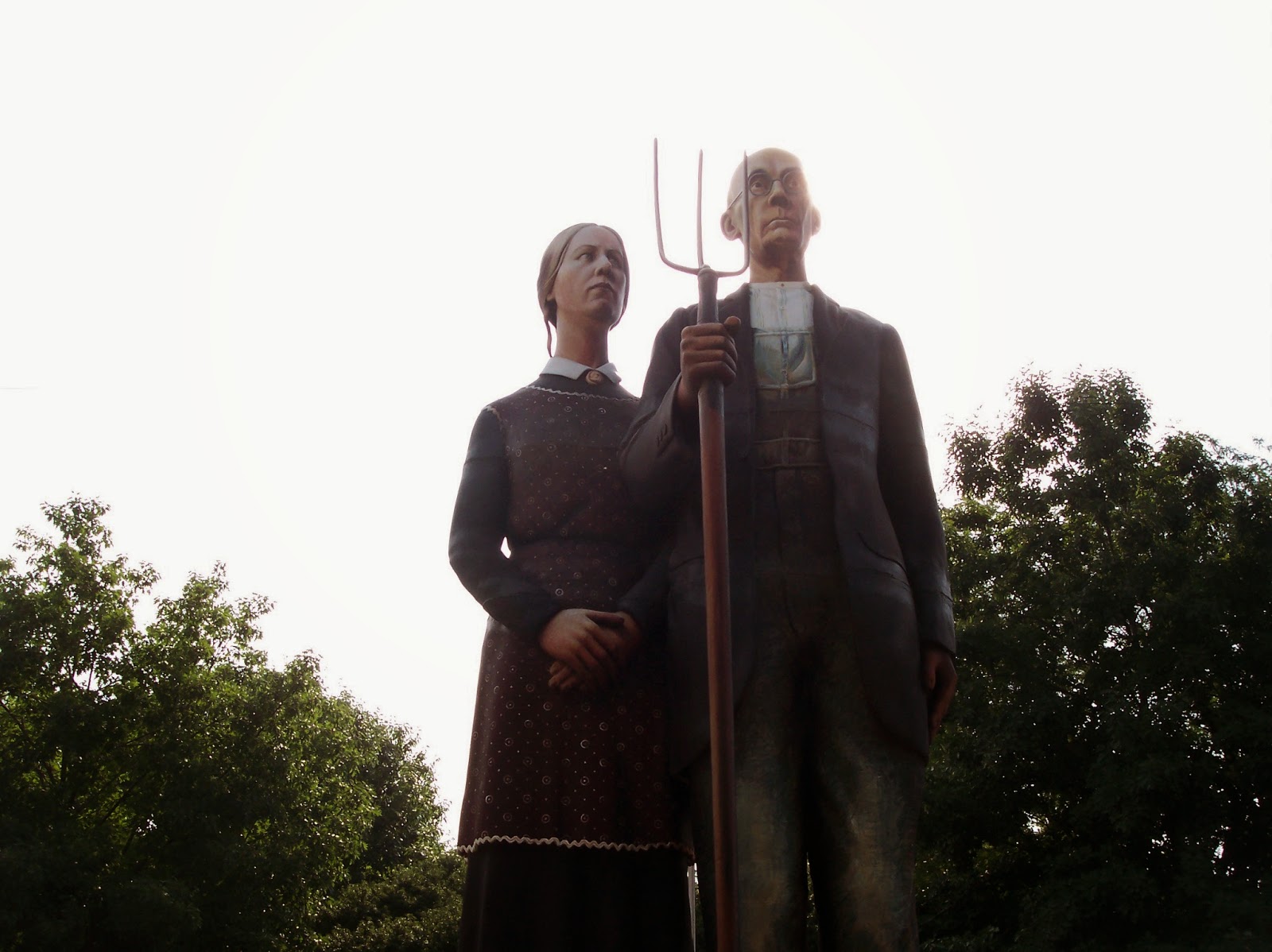 Toward the end of summer in Iowa we have one thing to look forward to, the Iowa State Fair. As the musical with the same name says, it's the best state fair in the state. I go every year, with last Friday being my time to visit. 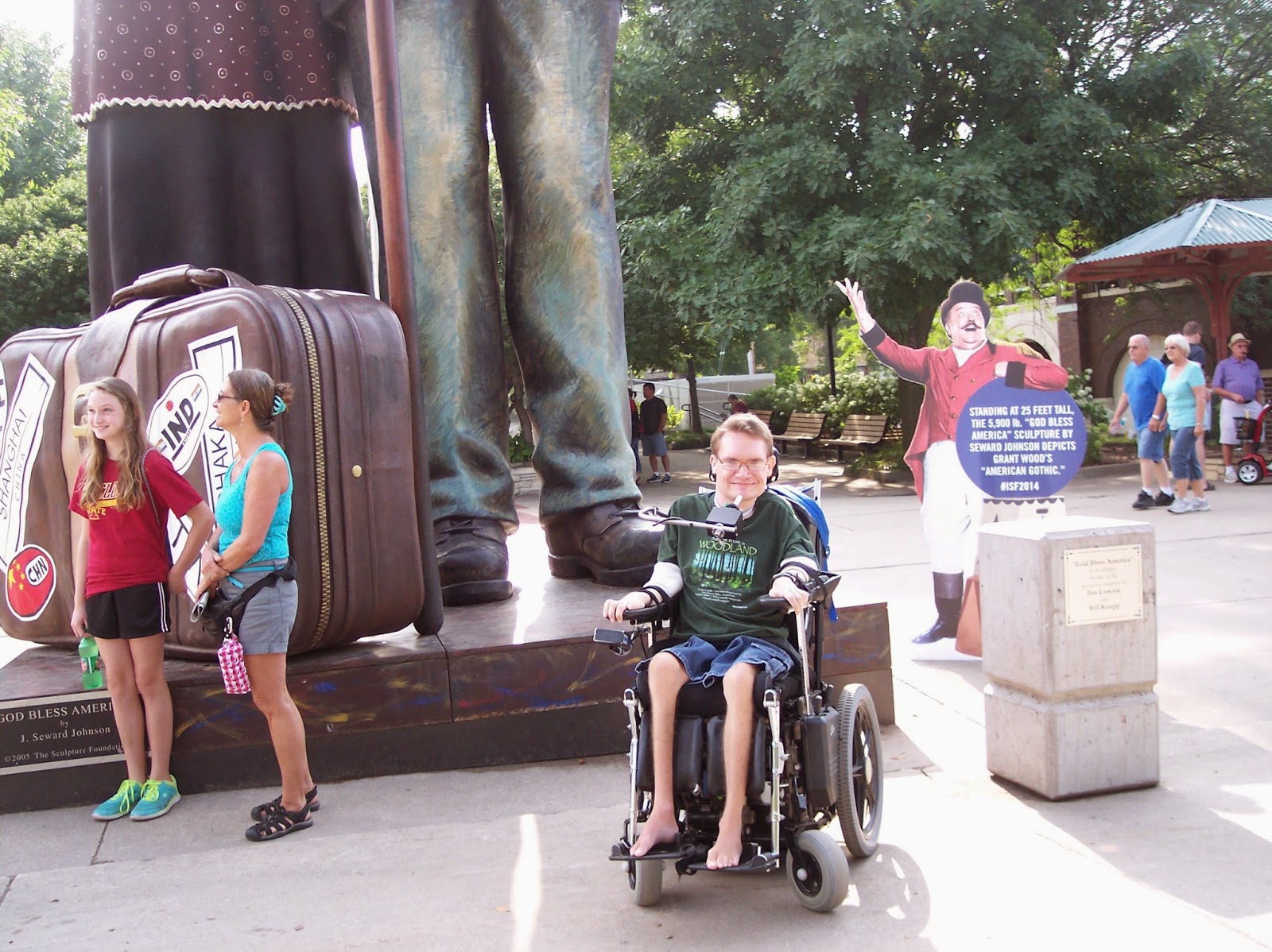 The attractions don't change much from one year to the next, but it's still always fun to go. One of the places I always go to is the Central Iowa Railroad Club's (video) train layout. They have a lot of well done modeling on their setup and it's fun to see the changes they've made. This year, a new attraction was a thirty foot tall American Gothic statue, which was painted in Iowa. You couldn't get a picture with someone at the base and tell who it was, or get a clear shot between all the people.

Navigating through crowds (video) with a wheelchair can be a challenge. Not running over kids or other people's feet is difficult when they're all moving around, but it's a skill I've learned through the years. Something that has changed is the amount of stares I receive.

It used to be that I would see a lot of people, especially kids, looking at this intriguing site of a guy in a wheelchair. I still do get them, but not nearly as often as a few years ago. However, with aging baby boomers, the scooter population has also exploded in the past few years. It's very likely that the two are related, but it could be that the general public is just getting used to wheelchair uses.

After visiting mostly every building, watching the one man band, touring the machinery and livestock exhibits, it was a full day. Figuring out how to cover my assistant's time was an added challenge this year, but it was a nice outing in any case. It was also a great feeling to not have insurance worries overshadowing everything and just get out to enjoy the day. As summer begins to wind down, more days out will hopefully continue.
Posted by trainman at 7:04 PM No comments:

Labels: entertainment, life as a quadriplegic, living in a society, regular life

In high school I started to read the Bible mostly every night, but slowly. I just one chapter every night, no matter where it ended. After graduation I increased to two and eventually three chapters at a time. This is a habit I continue to follow today, nearly fifteen years later. There are nights I miss, if I'm too tired or we get a late start for some reason, but I generally get my nightly reading in.

A few years ago, a friend wanted to get into regular Bible reading and maybe we would get the Bible read in a year. I did a little searching and found the reading plans at Bible Gateway. We looked over the options and picked one, but we were already behind starting in February. Simply reading two days' worth at a time would get us caught back up though.

Unfortunately, the busyness of life got to my friend's schedule too much and I lost my reading partner after a couple weeks. I didn't see a good reason not to continue, so I just keep going with online reading in the morning and the physical Bible before bed.

After the first year, I encouraged another friend to read along with me online and it proved to be a learning experience for both of us. We did different plans for three years until I took 2013 off to read daily articles by Answers in Genesis. However, I took up the morning reading routine at the beginning of this year.

My nightly reading started with Genesis 1:1 in early December 2013, with my morning reading doing the same on January 1. I have stayed about the same distance apart in my readings for several months, but my morning reading has been catching up to nights since June. It looks like this week, in the last half of Isiah, my morning plan will catch, and pass, my night schedule.

The NIV Bible was revised in I believe 2011, and that is the NIV that Bible Gateway uses. I don't like how some words are translated, so I switched to NKJV online. My Bible is the 1984 revision of the NIV, so it has been interesting comparing the translations. I also have a hard time concentrating when reading and my mind tends to wonder off. Going through an area again has been helpful for spots I missed as well. By next week, it looks like my morning will be in the lead, and we'll see what else comes up in the quad life.
Posted by trainman at 5:28 PM No comments: