I have heard many people talk about not being able to sleep at night. It seems to be a common topic for health advice, sleep medication, and news items. Unfortunately, it's a problem I share with many others in the country.

For many years, sleeping wasn't much of an issue for me, but it has become more and more of a problem as time passes. The last few months have been especially bad and I can't quite put my mouth stick on a reason.

In order to save time during the day, I have always had a lot of my cares done at night. My caregivers do my stretching exercises a couple times, do my bed bath, trach care, restroom needs, turn every two hours, and more. With that list, you might wonder how how I sleep at all. Since I can't feel my body, and what they're doing to me, it's pretty easy.

As long as the pillow stays over my head and no one touches my face, I'm good. The problem is with what I can control, my head. It seems at night is when everything runs through of what I need to do for work, for church, or even ideas for blog topics. I write some pretty good posts under the covers, but too bad my computer isn't connected to my head.

The sleep aides that I take don't seem to help much either in that I can hardly tell I took them. It's becoming quite common for me to have 1-2 hours of sleep at night and not much more. With laying flat in bed so much, I sometimes think my body is just too used to it and the position doesn't feel like sleep.

If I figure out a good method, other than a hammer, I'll let the world know. Until then, I'll continue the sleepless quad life routine and think of next week's entry.
Posted by trainman at 3:47 PM No comments:

Labels: dealing with assistants, health, life as a quadriplegic

During last week's bike ride, the poor shape of my chair became more evident. We noticed before that my seat cushion was uneven, it pushes my right leg higher than the left. My right leg is a little shorter than the other already, but the cushion is making it worse. Every time my legs came down, the cushion on the right would bulge out like a balloon. The left side behaved nicely though.

The cushion I used is called a ROHO and uses air to adjust to your needs. My particular model allows four different section to be adjusted independently, under each leg and two in the back. A couple days after the ride, my assistant and I tried to adjust the cushion.

Adding air helped to put the back portions higher, but the front looked ready to explode. Releasing some pressure under the legs helped, but it still has some problems. I'm hopeful this week's ride will be better with the improved cushion, but I'm not holding my breathe.

On Sunday, we had a family party for my grandmother's 85th birthday last month. My cousin that doesn't get to come very often was able to attend along with his wife and four kids. His oldest sons (twins) have always been talkative when around me and this time was the same. However, now that they're 13, they are getting quieter. They and their seven-year-old brother were getting bored, so we went outside for me to warm up and give them something to do. An idea came up to have me race the younger brother a predetermined distance.

A running kid easily beats my 5 MPH top speed, but I do give a challenge. However, my chair didn't really agree. The left wheel kept popping and making odd sounds at every match. Fortunately, the boys' minds went on to other activities quickly and no longer needed speed. Last night though, we gave it a better test. After a meeting at church, I went to leave, to find out the elevator wasn't working. Four guys ended up carrying my chair, and me, up a short flight of stairs in order to get out of the building.

I'm thankful my old chair continues to work and get me around everywhere. Hopefully I will have a new one by the end of the year, but time will tell. That's all for this week in the quad life.
Posted by trainman at 3:38 PM No comments:

Labels: life as a quadriplegic, regular life, relying on others

Even with the longer than usual post Tuesday, I wrote too quickly and forgot an important part. The therapists working with the bike were very impressed at the flexibility in my hips, knees, and especially ankles. They noted that being injured for this long and having such great joints shows that I've had excellent care over the years.

I can fully agree that I have been blessed with great caregivers that at first put up with my parents being particularly about stretching and exercises and now me. Taking four times a day to do my stretches can seem like a lot, but this week confirmed it has been worth it. God has been gracious in His care for me through these people and it is something I can't emphasize enough.
Posted by trainman at 3:10 PM No comments:

In my life, I've been blessed to be surrounded by people that help me do things I enjoy. For many years, I served as a counselor at CHAMP Camp and have loved working with the kids. Giving talks at grade schools for the past decade, and recently colleges, is also a great break from programming web sites.

On occasion, I get do something extra like trying out the zip line at camp last year and going to the Creation Museum a few weeks ago. Monday was something all these combined, and still has me grinning thinking about it.

A lot has changed in rehab technology since my injury three decades ago. One addition is something called an FES (Functional Electrical Stimulation) bike. It's similar in practice to my diaphragm pacemaker in that it uses electric pulses to stimulate muscles. In this case, electrodes are part on my legs, and other areas. to stimulate the muscles to pedal a stationary bicycle. Other, younger, quads I work with use this system, so I thought I would give it a try. It took getting a new bone density test, but my doctor approved for me to try it. 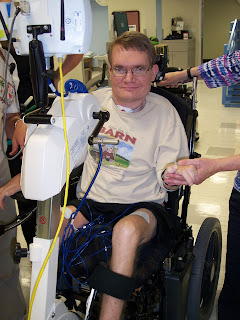 Getting setup for the first time took quite a bit of arranging, but I was able to stay in my chair, just with the leg rests removed. The PT got to know me quite well in placing the electrodes on my legs and lower back. After some final tweaking, everything was set.

The first two minutes were completely done by the machine turning the pedals and my legs just along for the ride. It felt great to have my legs actually moving in unison with each other and going through the cycling motion. After the warm up, it was a combination of motor and my own muscles doing the pedaling.

Initially, my one leg spasmed a fare amount, but not bad enough to stop the process. The next 15 minutes was something I don't ever remember feeling of my legs actually pedaling. We tried going with just my own muscles, but that didn't work for more than just a few seconds. Afterward, my legs, and arms, were calmer than they have been in years. Nine hours later, they were still very loose compared to normal.

One of the technicians said that repeated use will help improve circulation, and aid healing my wounds, and improve my muscle and bone density. Ideally, I should do weekly, or get my own and pedal 3-5 times a week. I would love to be able to do that, but weekly trips to Des Moines take a lot of time as well as gas and vehicle use. However, the system costs $14,000 and may not be covered by insurance.

I'm scheduled to go again next week and I can't wait for the appointment to come. God has given us very unique tools to help with paralyzed bodies and I'm glad I can use this one at least a few times, and try to keep from grinning.
Posted by trainman at 4:36 PM 1 comment:

We just celebrated Independence Day when the US became its own nation. A lot of time has passed since becoming a free nation and there has been a lot done in these centuries.

Programs like social security, Medicaid, and Medicare have helped people to live more independently than they could without. With having so much time I have to give for normal living, working full-time would be very difficult. Laying flat for multiple hours a day doesn't allow work to be done very easily. Last month, I worked over 21 hours for paid web development as well as multiple hours volunteer work and some speaking. It often felt like every minute of sit time was spent working. I have done full-time work before, 40 hours a week, but there's no way my body could handle it anymore.

Medicaid is what is currently allowing me to stay out of a care facility. For many years, I barely used it for anything. However, I'm thankful that I was able to fall back on it with last year's insurance changes. For others like me, it fully covers living in a nursing home and covers needs such as ventilators and wheelchairs. It only allows the bare minimum, but it's better than laying on the floor unable to breathe. Unfortunately, both programs also have their problems.

For social security and Medicaid, I have to have very little income or funds to my name. With a limit of $2,000 in total financial accounts, savings are impossible. I am allowed to have a fund for burial expenses, but only as long as I can't access it while I'm alive. Since I can't get life insurance, they tend to like clients that breathe independently, I'm thankful I can at least save in that way.

However, if I was able to get full-time, or even regular part-time, work, I would not be allowed to earn more than $2,000 per month. Some states do have programs around this, but I am not aware of one in Iowa. You therefore become dependent on this programs for daily living. Without them, even earning a regular full-time wage, I could never afford medical expenses. It might be possible with a six-figure income, but it would still be a challenge. It would be quite a change to go from basically no income to a hefty salary as well.

With our current system, it makes me partially independent from family and friends for basic needs, but dependent on it as well. Living the quad life can be a challenge from many angles. We'll see what God has in store for the coming week.
Posted by trainman at 6:21 PM No comments:

Labels: life as a quadriplegic, living in a society, relying on others
Newer Posts Older Posts Home
Subscribe to: Posts (Atom)