I don't believe that climate change is a direct result of man's activities. However, I'm greatly enjoying warmer winters. February in Iowa is usually very cold and I don't want to venture out unless absolutely necessary. This year has been great, so far at least.

Friday and today had high temps over 70° with multiple days in the low to mid 60's. Yesterday was nice enough to go out and do some rail fanning. Unfortunately, a four-hour stay only resulted in seeing one train that counted, but it was still a good day to be out. I can't say I remember being out in February with the van's windows open and having flies buzz around.

Often when I'm sitting and waiting on progress bars (such as now for a Farm Sim update), I will try a game or of online Sudoku. I am not very much into at some people I know, but it's a way to pass time and keep my mind somewhat active. Even just playing on easy mode, my times aren't all that impressive as you can see.

My main day assistant has a few games on her smart phone. When I'm biking, she will often bring up a couple few while my legs make their rounds. In the 1.5 minutes it takes her to do an easy game of Sudoku, I can maybe get one number. Farkle is more my style when waiting, very little thinking required and time isn't something that's counted.

Not much else has been happening in the quad life this past week. My day help for Monday isn't feeling well, so it will be a longer weekend away from work out of the house for my parents. The warm stretch is forecast to continue for a few more days and I'm hoping it will be warm enough to go bike with just shorts. My break away sweat pants work well, but it's a little strange taking half my pants off, and on, in the rehab gym.

Have a great week readers and I'll see what God has planned for the last full week of February.
Posted by trainman at 4:06 PM No comments:

I am 35 years old. Depending on what age group you talk to, that's either young, old, or just right. After this week, I'm feeling on the old and outdated side.

In early 2003, I graduated with my Associate's degree in Information Technology (IT) from a local business school. A few years later, I noticed that the degree was no longer an option. Last year, the entire school was bought out by a state university and was closed. So not only did my college feel they could offer my degree anymore, the entire school went away. It really feels weird to say your degree no longer exists and then to give an explanation to what the school was. 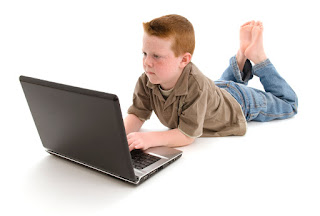 The unofficial slogan for an IT degree is "I can Google that for you." I unfortunately agree with the statement and lived it last week. My mom's computer started having problems, so I used Google to find potential solutions. After finding a few possibilities, none of them worked. In order to try to make faster progress, I had her call a computer help person in town. It turns out her computer should have never upgraded to Windows 10 and therefore it was only a matter of time until it died.

You can read all you want for education, but for me the best teacher is working with your hands (or mouth stick in my case). With being down so much these last few years, I don't get much time to do anything, let alone learn something new. I'm even feeling it with web related technology in not having opportunity to work with more options. It feels like I'm back to being a kid just playing computer games and watching TV (Netflix or YouTube actually).

Hopefully the latest trouble with one of my client's sites will at least allow an opportunity to try something new. In the mean time, I think I'll try to increase my school talks and work from my experience of living the quad life. Whatever God has planned, I'll be along for the ride another week.
Posted by trainman at 5:11 PM No comments:

Unless you live completely off the grid, you have likely seen protests in the past few weeks. It seems that pretty much everything President Trump does results in some sort of protest. I saw a spoof a few days ago that I liked. If the president was recorded breaking wind in a restroom, protestors would likely accuse him of causing global warming with an increase of methane.

I will freely admit I was not around in the 1970's, I wasn't even born yet. I've seen videos and stories about hippies and Vietnam protestors during that era of history and I'm imagining the current problems are getting more extensive. Someone would need to confirm or deny it for me, but that's my estimation.

Every time I watch the news, a phrase from Judges keeps coming to mind, "...everyone did as he saw fit." (Judges 17:6) Israel did not have a leader that followed God's law and everyone just did their own thing, to put a modern term to it. This was the case with the Obama administration as well, but it seems to have grown exponentially with the new leadership, at least according to the mainstream media.

No human leader will ever be perfect, they're human and have inherited the sin nature from our original parents. However, we have rapidly gone away from the Bible and following God's conduct for living. Things that are good, like stopping funding to kill babies, and stopping people that want to cause harm, should be universal desires, not something to protest.

As Jesus said in John 18:36, "my kingdom is not of this world." We can pray for the country and its leaders and hope to see improvements and a return to peaceful relations. However, what happens to the quad life in this short time period on earth isn't the issue. If everyone, including protestors, would look to the true source for guidance and wisdom, it would be a change in the right direction. As always, I'll see what another week brings.
Posted by trainman at 5:41 PM No comments: