Home and vehicle ownership mean things eventually need fixed and that has especially been true this month. The first thing to start having fits was the van, the only vehicle I can ride in that we own. At first it just started to chug every now and then, but it continued to worsen.

It was fine to about 35 MPH, then it would go into chugging fits until about 45. Dad did some research and realized he should have replaced the fuel filter several thousand miles ago, and figured that was the problem. One Saturday on the driveway he went to change it, but couldn't get it off. Going around my schedule, he managed to get it scheduled at the local Ford dealer. However, despite having it twice, they have yet to be able to replace the filter. With multiple hour-long trips to Des Moines for speaking engagements, it continued to get worse.

Then Saturday morning, the night nurse let mom know the toilet in the bathroom near mom had been spraying water. After a quick look at the tank, dad found a broken part. Mom had a few things she had to do and we didn't have a nurse, so dad and I again went to Des Moines. The van chugged up every hill and at various speed limits, but thankfully got us to our destinations. Two home improvement stores, one twice, supper and the return home thankfully went well.

Unfortunately, despite three boxes of parts, none would fit the stool. Therefore, the nurses have been either pouring water into the toilet to make it flush or use facilities further away in the house. Today's fix was to get a new porcelain throne that dad installed tonight. After much frustration though, a manufacturing defect became apparent and it will need to be replaced. During Saturday's trip, dad realized how bad the van is getting and hopes this week's fix repair appointment works.

At least through somewhat minor trials we can be thankful that all trips were successful in getting to points A and B, and C. The nurses are congenial to take a longer walk, or extra work, to use the restroom. Now as long as my antique wheelchair doesn't get added to the list, we'll be good until next week.
Posted by trainman at 7:29 PM No comments:

I watch the news most nights and for the past several days, Ebola has been one of the featured stories. Discussing how a nurse may have been infected, tracking down people that may have been exposed, and so on. It now sounds like some test antibiotics are being taken from Canada to a few people in Africa. For those that are dealing with this outbreak, I hope the test is successful.

It seems that every few generations has an outbreak of a disease that ends up causing new breakthroughs in medicine. Polio was the most recent one that comes to mind. It was uncertain how it was spread and the effects of contracting it were serious. In the same way, new theories are coming up that Ebola may be spread through the air.

Fortunately, with polio a vaccine was developed that halted its spread. I can't say I've heard of it occurring in recent history. Hopefully Ebola will have similar results in the generation to come.

When an epidemic or crisis occurs, it seems that the regular rules for vaccine testing are relaxed to a great extent. I have an uncle with Parkinson's Disease (PD) and he has been waiting for a new medication to be approved for many years. Unfortunately, for my uncle and thousands of others with PD, the testing and approval process in the US is very slow. It is good to be careful when dealing with medications, but I sometimes think there's a little too much testing. When a drug has been proven affective and not to have major adverse reactions, it should be used. The last part is the tough one though since every medication has unintended consequences.

People have asked me before if I think I will ever walk again. A lot of progress has been made on SCI research, but I honestly don't believe I'll see a fix in my lifetime. If a scientist came out tomorrow saying that he found a solution, the proving and authorization time would likely take as long as I've been injured already. Plus, my bones and muscles are in bad shape after so many years of non use.

In the off chance a treatment or medication came through, it would depend on the situation if I would do it. If it was uncertain to work, and my going through with it would help someone else, then I may consider it. However, if it was a certain fix, and I may delay someone else from being helped, I would be last in line. One thing is certain though, I would NEVER use something like embryonic stem cells that cost another life. A few short years on earth is nothing compared to eternity and answering God on the decisions I made.

That's all I have for this week. We'll see what comes up next time.
Posted by trainman at 7:48 PM No comments:

Labels: health, helping others, living in a society, relying on God

In early high school, around '97-'98, I started having trouble with pressure sores. Therefore, I got an air mattress for my bed to help reduce and prevent sores. This was a three-cell mattress, head, middle, and foot, that worked pretty well.

This mattress had thousands of tiny holes that continually lost air, so it had a pump that ran continually to keep it inflated. I was very aware when the electricity went out, because I went flat quickly. In any case, I could easily sit in bed and do whatever I wanted and still have good pressure relief. With a few replacement cells, I've used the same mattress ever since high school.

Unfortunately, like a lot of my equipment, it is now no longer produced and I can't get replacement parts. A few months ago, we noticed my butt was really sinking in when I sat up. When I was flat, I resembled a hot dog in a blue bun, making it difficult to do my cares and attempt sleep. For the first time in more than a decade, it was time to get a new mattress.

The first one I received was two inches too long for my bed, so we started looking at what it would take to lengthen my bed. However, after further testing, we noticed the air mattress was not made for sitting, just laying, so it was back to the phone and supply company. The second attempt is now underneath me and working well, at least for now.

Unlike the old system, this one doesn't lose air, so the pump isn't constantly running. The new quiet in my room was nice, but has taken getting used to. The first day I had it my caregiver and I committed that it sounded we were speaking louder. The second major item is that the air continues to move while I'm sitting, or laying.

Every four minutes, the pump comes to life and adjusts the air in various places. At one point, my keyboard will be just right, a few seconds later I find it moving closer or further away and I need to adjust it. I would say it's a good change and should help with my current sores and hopefully reduce problems in the future. My keyboard is going away again, so we'll see what comes this week.
Posted by trainman at 3:08 PM No comments:

The saying hit the ground running sounds like this week for me, but since I don't run, I'll roll. Today is the only day this week I am not scheduled for something. Several days this week have multiple items per day.

In some ways, this time of year is good with having more to do and being active. However, my tendency to want to stay home and on my computer wants to stay put as well. That's especially true as the temps get cooler. This week isn't supposed to be bad for October in Iowa, low 60's for highs most days, but it's a taste of what's to come. 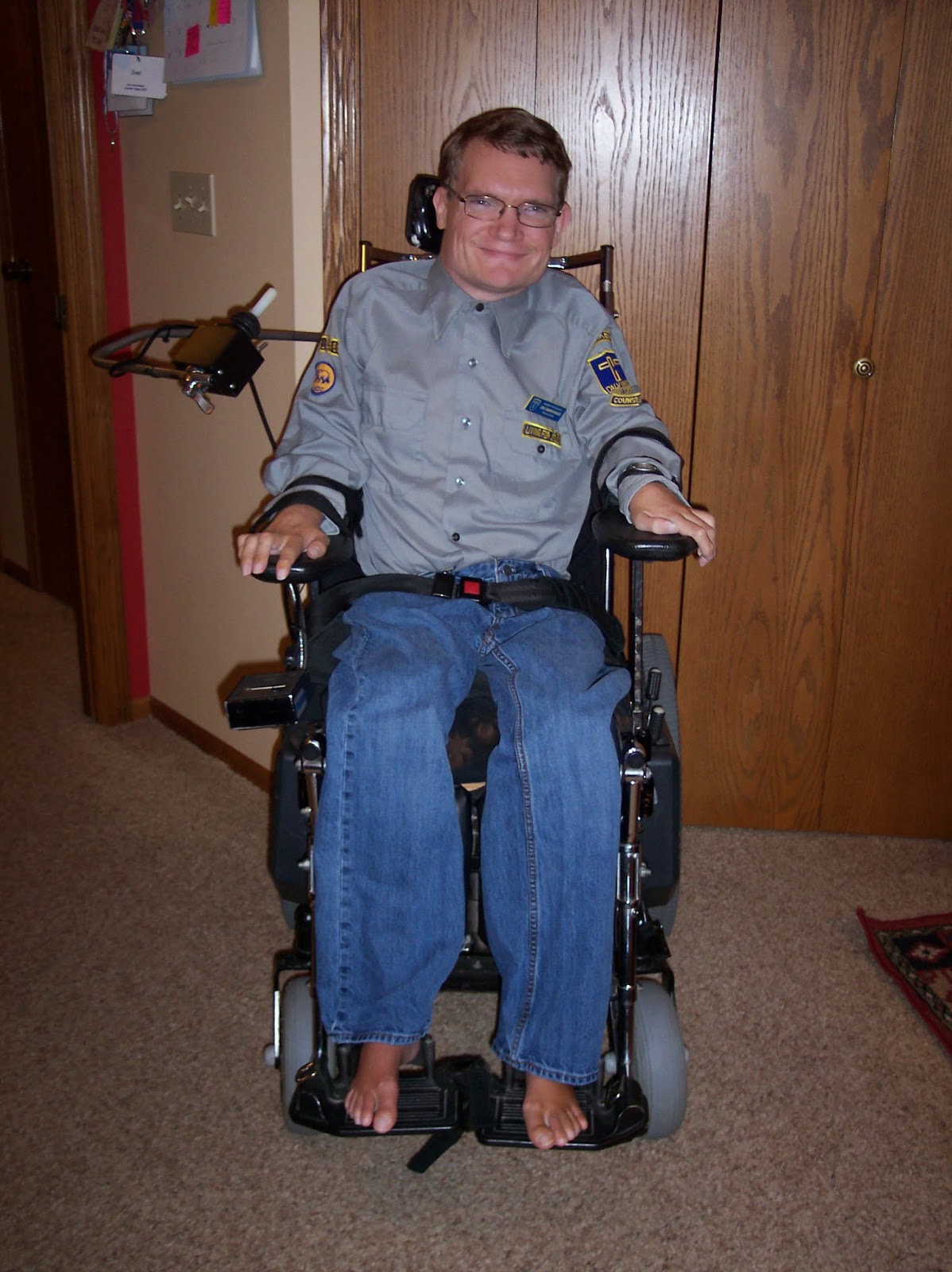 Colder temps mean layering on more clothes, and going back into footwear. Along with that comes stiffer muscles, more spasms, and being uncomfortable when out and about. One thing is looking up this year, older kids at church.

My dad, another guy, and I have lead junior Cadets for three years now. This year, we just have second and third graders, the same kids as last year. Two have graduated from our group, so we're down to six this year. So far, they are easier to work with, noticeably better at reading and writing and just seem more grown-up. I know it has only been six months since our last meeting in March, but they do seem older. I know the feeling parents have that their kids grow up too fast.

Two kids we have had for the last two years, three years for one, are now in the older classes. I wish I could continue with them and continue to teach, but just as they move on, I have more to instruct in their place. This picture was taken on the night of our first meeting. We'll see how I'm looking in March if I'm able to continue that far.

The next entry will be during a calmer week, and I'll be looking forward to a rest.
Posted by trainman at 7:25 PM No comments: