With the end of the year just over a day away it concludes a year of endings for me. Last night, I finished reading through my physical Bible again. I have been to this point many times and it's always refreshing looking back all the way through God's Word and His plan for salvation.

Sunday was the end of my three-year term as deacon at church. These years have taught me to better see how my church is run and how decisions we make can have a lasting impact on many people. It has not always been easy and I am glad to be finished. However, going back to a regular member will seem strange for a few weeks as well as not knowing more of what's going on at church and my fellow members.

October was the end of using a full trach. I'm completely familiar with a free neck now and feel pretty used to just having the button. Unless it gets bumped, I don't even notice it's their anymore. With being completely dependent on mechanical ventilation, I may have to go back to a trach again sometime. For now though, I can say I ended the year without having one.

This year finally saw the end to working on a new chair. This has taken many years and I'm very thankful to be finished with it. I believe the final solution was a good choice for my needs and is working out quite well. Their are a few things I liked better about my old chair, but I guess having it be completely the same wouldn't be a change!

My legs also ended their complete laziness this year and biked over 15 miles. They still do a lot of just laying out in font of me, but at least they did something for a change this year. I measure the circumference of my arms and legs every four months to see if I'm loosing muscle or staying constant. Both legs grew in the last four months, when doing the bike, than they have in years. Yet another reason I hope to continue biking next year.

The coming year will likely have more beginnings and ends as the days go on. The quad life has many unexpected turns, but I know God is in control of it all. I pray your year will go well and I plan to continue regular entries here, and possibly elsewhere.
Posted by trainman at 3:46 PM No comments:

Labels: life as a quadriplegic, looking back, new year, relying on God

It has been a calm week in the quad life. After four visits, my dentist finally finished work on my tooth. Thankfully it hasn't been too much of a problem in using my mouth stick. With ordering my girlfriend's Christmas present, I also finished Christmas shopping for the year. It was once again all 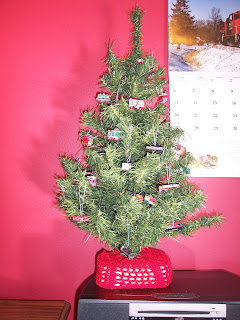 done online with no stores to visit.

Winter officially started two days, but it still doesn't look like it. A thunderstorm just went through with pouring rain and small pieces of hail. Two days before Christmas I would expect any precipitation to be either snow or ice, not something to remind me of summer. I will gladly continue with warm temps. Now that winter is here, it means spring is coming next!

My Christmas train tree added a few new ornaments this year. They are hard to find, but mom does manage to get them.

The two big web projects from this year are almost complete. For the first time in months I had free time while sitting to do other work. Getting caught up on paperwork wasn't fun, but it needed to be done. I may have more long-term work coming again, but at least these will be finished.

With work slowing down and the end of my term at church complete, I started taking the School of Biblical Evangelism. It's a course on evangelism in the modern world through an organization called Living Waters. I've been looking forward to having time to take it and so far it has been interesting.

That's all for this week. Have a Merry Christmas!
Posted by trainman at 2:45 PM No comments:

This weekend was a soggy one in Iowa. By Sunday evening, we had received two inches of rain with more coming down. The weather has been unusually warm for late fall, and I am very glad to see it stay. Even though it doesn't feel like it, Christmas is less than two weeks away.

Last night at church was our annual candlelight service. We have a service primarily of music sung Silent Night by candlelight. In the picture, I'm a couple feet to the right of the photographer, nicely out of view. It is a favorite service for many members of our church and visitors. 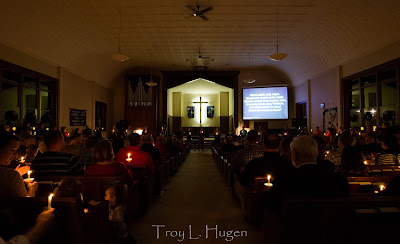 by the congregation, choir, praise team, and solos by different members. At the end, everyone sings

Singing praise to God for the gift of His son is a part of this season I enjoy. We can easily get distracted by getting gifts for those around us and forget the real gift we have all been given.

If you're reading this and don't know God's gift of Jesus, I encourage you to stop and investigate. In Exodus 20, God gave His commands to follow and has written them on our hearts. They may seem simple, but I know I've broken all of them at some point. Jesus said that all have sinned and fallen short of His glory. We are all deserving of eternal punishment for breaking these commands.

What we celebrate is the release from what we deserve. With Christ's birth, and sacrifice, we can have everlasting life in Him. Repenting of our sins and trusting alone in our Savior is the gift of salvation.

Living the quad life is difficult, but it is nothing compared to the glory to come. In this season, remember to keep Christ in Christmas as the reason we celebrate. For unto us a child is born, He is Christ the Lord.
Posted by trainman at 5:51 PM No comments:

If you're a fan of sports, then stop reading now. The past few weeks in Iowa have greatly confirmed why I detest sports in general.

Apparently the football team at Iowa State University (ISU) hasn't been doing well. Therefore, the coach was fired in order for improvement. However, along with being let go, he was paid $4.5 million to finish his contract. Less than a week later, a replacement was hired for $2 million for his first year.

In the time of less than a week, the school has agreed to pay $6.5 million for one position.This isn't even anything to do with teaching academics to students. I can guarantee the instructors don't get a seven-figure salary every year. This is entirely for nothing other than entertainment and bragging rights.

How many students' tuition does it take to cover this cost? Every year we hear abut increasing cost of higher education and students taking on more debt. Guess what, I found a place money can be saved! If you have to have the job, why not at least make it something like $100,00 or something close? The worst part, this isn't the only sport at ISU.

I can't begin to guess what all sports they have, but each one has multiple staff members with salaries. I don't dare to Google what these coaches receive, but I would not be surprised if they added up to several more million per year.

Iowa has two major universities as well as smaller state supported schools with sports. Looking to the all the universities in the country, how many billions of dollars are being spent just on coaching salaries? I can only imagine what could be done if these funds were spent on education instead, or not even added on to tuition

When I went to college, my school didn't have any sports. My classmates and I received an education that was respected by the community. A few years ago they started having sport teams. It was announced early this year that my college will be closing in June 2016 due to too much debt.

Maybe if I wasn't living the quad life I would better understand how this spending makes sense. For now though, it just solidifies why I don't support or follow any such activity.
Posted by trainman at 6:05 PM No comments: