Muscle spasms are a regular part of living with a spinal cord injury, and other disabilities. Mine are usually pretty well controlled through medication, regular stretching, and just general body management. The last few days have been hopping though.

Some spasms are good in that they help to maintain muscle mass, improve circulation, and help with bone density. However, they can make regular daily activities a challenge if not nearly impossible sometimes. This weekend, my legs wouldn't cooperate for anything despite having good stretching exercises and foregoing footwear. These two usually are all I need, but they didn't stem the jumping. Today when sitting in bed I was still resembling a jumping frog, but it has thankfully improved this evening.

My routine of sitting for 90 minutes and going flat for three hours has been going on for over a month now and is starting to get to me. Spending so much time flat, just playing games or watching YouTube or Netflix, is really starting to get boring. It makes me feel like I'm being lazy and not contributing anything to society, and it's true.

Trying to write while flat though is very hard to do, especially if I want to see what I'm writing! Making the most of my short sitting periods is becoming more important, but gets hard when I get stiff and need frequent re-positioning.

I have become very familiar with eating my meals when flat and it almost seems strange to eat while sitting! From what I'm hearing, the increased down time helped immediately after returning from camp, but doesn't seem to be making a big difference now. In order to keep some remnants of sanity, I think I'll be returning to two hours up and two hours down routine soon.

At least with plenty of down time, I have opportunity to think and do some reading. The quad life has its ups and downs in many forms, but I can remain thankful for the time I do have and look forward to what's ahead. Whether it's less spasticity, the next up time, or whatever God has planned.
Posted by trainman at 3:37 PM 2 comments:

Labels: barefooting, life as a quadriplegic, relying on God

When I received my spinal cord injury in 1985, portable ventilators were not very common. Fortunately, two options existed at the time and my parents chose a model called the PLV-100 by 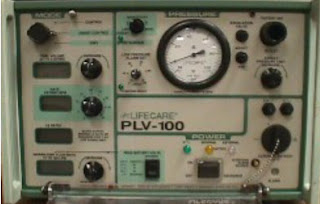 Respironics. It ran quieter than the other type and seemed to work well.

For the next couple decades, this is what I used to get every breathe. I had one vent on my chair and another by my bed equipped with a humidifier. In college, my original machines were replaced with new ones of the same model and the same company, completely covered by insurance.

When I received my diaphragm pacemaker in late 2010, I continued to use my green box while I transitioned to the new system and kept them available for backup. They remained close by at all times, until last month.

With the beginning of the year, my insurance decided it would be like Medicaid and start renting vents instead of paying for them. Even though my machines were purchased around 2002, my equipment provider started receiving rental checks for both machines every month. This increased monthly maintenance fees by a factor of 12 and meant I had to update to newer models, even if I
didn't want to change.

Therefore, I have now have two new vents still by Respironics, but this time a Trilogy. The large green machines are now smaller and blue, but also much noisier when operating. In talking with my respiratory therapist that does regular maintenance checks, the new machines are also not as reliable as the old.

Fortunately, it has been a few years since I have used a traditional vent for any length of time. If I did have to go back on it, this system should also be able to go on the back of my chair if needed. I wouldn't be able to make people hear me, but I would be breathing at least.

Some days in the quad life make me wonder if people who make these machines actually know someone who uses them or just looks at statistics and cost. In any case, I'm thankful that this technology exists and has worked well for so many years. I was told that some of the old vents are being taken for use in third world countries, so they will get used by people that need them. We'll see what another week will bring.
Posted by trainman at 3:55 PM 1 comment:

One Year of Working Legs

One year has now passed since I first wrote about my working legs and using the FES bike. In the year, I have had 26 sessions (24 visits) and biked nearly 55 miles with my own legs. I have also put about 1,900 miles on the van in traveling to and from Des Moines to go biking.

In this time I have seen my leg muscles increase in size and generally stay much less spastic for about a day after a session. One nurse has noticed the start of improved circulation in my legs and my skin doctor has also seen circulation increased to help wound healing.

I no longer grin like a child when biking, but it is still a very great feeling. Seeing my legs actually moving on their own, and getting exercise is not like anything else I do. The sensation I get from feeling them move in a regular cycle is a wonderful change to just usually having no movement. A change was made to my stimulation settings a few weeks ago and I was beginning to feel what I think was pain in my one leg. I didn't think this was good though, so yesterday they were adjusted back a little.

After missing a few months this winter, I have mainly been going weekly since late February. The increase in frequency has been a good change in decreasing muscle spasms. When I have been able to go twice a week it's even better. I can only guess how 3-4 days a week would go, but it would certainly be great to have calm muscles that still get good exercise.

At this point, it looks like I will continue to travel to Des Moines to use the system. Unfortunately, policies for insurance and the bike company don't exactly work well together. This has been a busy part of the quad life this year in coordinating time to get to the bike and get a session in, but it is one I'm very thankful I can do. This video from last week is what each time looks like, just with better audio in real life. Until next week, we'll see what comes!
Posted by trainman at 7:36 AM No comments:

I have always heard people say they need a vacation after a vacation. I can especially understand that when the occasion is spent keeping busy at volunteer work. For me, I wouldn't have time for another trip. It feels like I have been busy and trying to get caught up since returning over a week ago.

With web work being slow this year, I didn't have a lot waiting for me when I returned. There were over 500 messages in my inbox, but several were from Facebook and did not acquire my attention. They were all cleaned out within two days and backed up work completed on late Monday. The main culprit has been medical needs.

At camp I was able to tilt a lot of the time and not give pressure directly on my skin sores. Two of the areas had very little if any change, but the third did worsen a little. Therefore, instead of sitting in bed for two hours and then laying flat for two, I'm doing 90 minutes up and three hours down. This has already helped, but it makes it difficult to accomplish much.

Since returning, I have also had regular appointments, trips to Des Moines, getting a new vent (maybe a later post), and had more work come due to a new month. I had originally planned on doing this post a few days ago, but finally was able to take time for it.

Monday my family and I celebrated Independence Day with some friends at their house. It was good to get out again and enjoy fresh air while watching fireworks. The display was good, but I kept getting distracted by the surrounding stars. I'm not in my chair and outside very often when the stars are out, so it was fun seeing God's creation displayed while celebrating our independence to serve Him.

This afternoon had a break from the busyness of summer, but I don't expect it to last. A busy quad life is a good challenge to have, but so is taking time to stop and gauze up for a few minutes.
Posted by trainman at 3:30 PM No comments: