Time, or not to Time

The end of October has been busy for speaking engagements. Last week, I posted about doing the virtual training with OT students. Friday morning, I was the chapel speaker at a small Christian school, and this morning I preached. Reviewing and keeping each presentation separate in my head was a challenge, but timing my talks was another issue.

When I started speaking at grade schools over 15 years ago, I carefully monitored my watch to see when my allotted time was up. I didn't want to take too much of the teacher's day and also keep the students' attention. I still do similar today, especially when visiting multiple rooms, but not quite as carefully and judge by how the kids are reacting. Colleges, I try to keep around an hour, but most are okay with going over and having less time with the instructor. 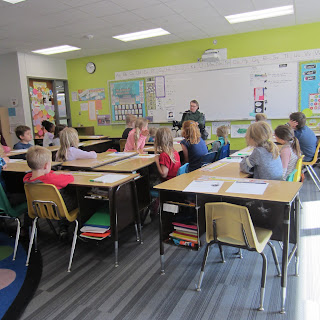 Last week's virtual class was very strict on time, but not the latest two events. I could go anywhere from 10-20 minutes with chapel and the remaining period would be filled with an activity. Therefore, I just talked and allowed however long it took. With preaching, I have started taking the same method. I very rarely look at my watch and primarily just go until everything I had planned is finished. Some in the congregation may not agree with this method, but I'm only an infrequent preacher anyway.

The big thing I worked on with my last two sermons was timing my Scripture reading. My biggest complaint, or regret, about my diaphragm pacemaker is pausing to take a breath every four seconds. I can hide it fairly well in normal speech, but not when reading. Therefore, I try to plan what to read, when to pause, and try to make it sound natural. Getting to read God's Word is a privilege that many people around the world don't have; and reformers like John Wycliffe gave their life for making the Bible available to everyone. I want to present it as clearly as possible, but the breathing quad life adds a challenge.

After today, I'm not scheduled to preach, or speak, anywhere until late November. That is also the latest in the year I generally agree to go anywhere. However, this weekend already feels like winter; hopefully it's not a prelude of what's to come in months ahead.

About ten years ago, I started speaking at local colleges. I had been going to area Christian schools to talk about disability awareness and serving God with whatever tools we're given. I now had this new contraption of a diaphragm pacemaker and thought it would be something helpful for students.

I have been a regular speaker now for students studying physical therapy, occupational therapy, EMS, respiratory therapy, and occasional nursing classes. However, all the classes have been within driving distance from home. The furthest I have gone was two hours away, and didn't really want to go that far for an hour-long presentation.

With this year's pandemic, everything shut down and many things, like college classes, moved to meeting virtually. This summer, I did a couple of my regular classes, but through webcam. It wasn't the same as in person, but still went pretty well. Leading two virtual classes with local schools made me wonder about trying other colleges that are too far away to physically visit. Therefore, I contacted a counselor friend from camp who teaches OT in Indianapolis. It took a while to find a willing group, but I did a virtual class Thursday with an occupational therapy student organization. 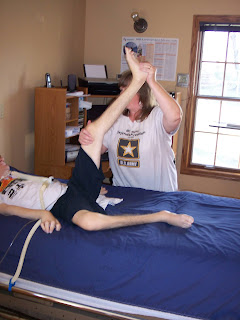 The first 15 minutes of the hour were taken by a business meeting. Therefore, I had 45 minutes to do a presentation that generally goes a little over an hour. I skipped most of the videos I usually show and only lightly covered areas I generally explain further, but it generally went well. I go over how I use my mouth stick, wheelchair, and do regular stretching routines to decrease muscle spasms. In the years I have been living the quad life, more technology has enabled more therapy, but the basics still apply. My regular assistant, Sara, was still out on sick leave as well, but dad did a good job in helping where needed.

Now my thoughts are wondering about trying more schools, but the question is how. For my current visits, I emailed several instructors and a few of them responded to give me a try. I could do the same and see what happens, but it's not something I like doing very well.

I'm thankful for all the years God has used me to go and talk with different groups. Even with the problems associated with COVID, it has opened up new potential areas. I will see where God takes me with this venture and if it is His will to do more, then the replies will come. I never know what to expect, but I will see what the week brings.

My parents do a large amount of my care and covering hours that I don't have caregivers. For many years though, they have been able to take two extended, 7-10 day, vacations a year. In the evenings, when my parents usually help me, my grandparents and irregular caregivers helped cover the time. Now with both grandfathers gone, fewer hours for caregivers, and less help, it has become hard for them to get away for more than a day. 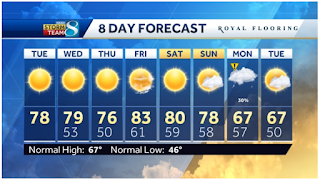 With fall approaching and the change in trees, mom and dad got it arranged to be gone for two days and one night. Only one evening needed to be covered and my regular day assistant would cover Friday and Saturday as her regular shifts. When the weekend's weather was predicted, it looked like a great time to be out.

On Thursday, Sara, my assistant had a bit of a cough, but nothing unusual for this time of year and allergies. Friday morning though, ten minutes before my parents planned to leave, Sara called that was ill and wouldn't be able to come. Therefore, at 6:00 in the morning, they unpacked the few bags they had and called to cancel the hotel reservation.

This isn't the first time plans had to be changed, but I always feel bad when it happens. I was sad that Sara wasn't feeling well, and more disappointed that mom and dad couldn't get a break from me. I'm very thankful for all they have done and instead of looking forward to retirement years, they are still stuck with helping me. It is a part of the quad life that has become familiar, but never gets easier.

Yesterday, the predicted nice weather continued. The three of us took advantage of it and went to northern Iowa to watch trains for a few hours. It wasn't close to a two-day get away, but at least they were able to get out of the house for a while.

Winter will soon be showing its ugly head again when we don't go out at all. Even though it wasn't planned, I'm thankful when I can get out to enjoy God's creation.

The first year I was eligible to vote was 2000. I had just started college and had heard about absentee voting. It would allow me to cast my ballot without having to drive an hour home. I have voted with this method every other year since then, but a change might be coming.

With absentee voting, I can simply fill out my choices in the comfort of my own home. If a choice comes up I didn't except, then I look up the needed information to make an informed vote. In school, I always told someone what to write for my test answers. It was much faster than trying to write myself in the allotted time. I can imagine voting in person would be the same, and doesn't exactly sound very private. 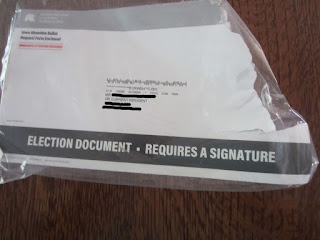 As usual, I requested my absentee ballot and mailed my completed form with the needed information. A few weeks later, an envelope arrived saying it was ballot information, but about 25% of it had been torn up. It was in a bag from the post office saying they care about our mail.

Throughout my life, I have received a fair amount of mail; insurance information, birthday cards, bills, junk mail, and everything else have arrived safely. Of all the letters to get eaten by a mail sorting machine, why was it this one? Looking closer, I could see it was a generic address that could go to any resident at my house. The chewed up envelope was for the problematic mail-in ballot request and not my absentee ballot, I think.

I filled out another request form, but I'll wait and see what I get. As I wrote two weeks ago, this is another critical election that may have major consequences. In order to make sure my vote is taken, and accurately recorded, I may venture into in-person voting this year. That in itself could be an adventure, but so is much of the quad life.

Lately, I have concluded many of these entries with relying on God and His control. This is another occasion of the same, as is every part of life.