It is the unofficial start to summer, a day that most people have off work and enjoy an extended weekend. I'm in that group, most of my day has been spent playing Farming Simulator 15 and Minecraft. It has been fun, but also need to remember the reason for the day.

On Saturday a small group from my side of the family went to the cemetery where my uncle is buried. For some reason, cemeteries don't have handicapped parking that I can use to get out of the van. Grass isn't easy to drive on either, so dad parked the van close by and everyone got out, put some flowers up, and talked and remembered.

As I sit in the van looking out, I see a sea of grave stones ahead of me row after row. One was a recent addition that I remember putting the funeral service online. Every stone marked at least one if not two lives gone. Everyone has a story with it, relatives left behind, and some past connection to the area.

Hearing about each individual's life could take a lifetime in itself, while your own story is being lived. While we were there, a few cars drove by slowly looking at names of either close relatives, friends, or people they only knew by association. The birds continued to sing in the trees while tales of times gone drifted through the air.

Everyone is part of the ultimate statistic, ten out of ten people die. Some died while fighting for this country while others simply pass during the night. At some point, my story will be complete, as well as you the reader. Days like this are when we remember those that have gone, and others will do the same for me (at least I hope).

As your story unfolds, make sure to stay with God's rules for the life you've been given. When the quad life is over, it will start anew in eternity. Enjoy the freedoms we have to be thankful for and stop to remember those that have gone before and have yet to go.
Posted by trainman at 3:29 PM No comments:

Labels: living in a society, memories, relying on God

Last September I helped with my friend's wedding in northern Indiana. While there, I met many of his friends, including the bride's maid. Robin and started chatting via social media not long after that and started to officially date in October. Pretty well every night since then we have spent a couple hours every evening talking about everything in God's creation. 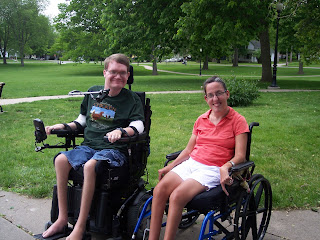 However, we still only saw each other in person the one time last fall. Robin also lives in northern Indiana and with both of us having challenges that require assistance from others, travel isn't easy. Winter is especially not a good time to try to be out from home, so we waited for a time that we could see each other again. That finally happened this weekend.

We looked at possible days back in January and decided May was a good likelihood for nice weather and easy travel. Coordinating, and finding, a caregiver took some work as well, but we were thankful to be able to get this weekend for her to come.

It was a short visit with only having yesterday and this morning together, but we tried to make the most of it. Iowa finally had a sunny and dry few days, so we were able to go in and out easily, tour the town, and even spend some time in the park. We also spent plenty of time at my house meeting my parents and just spending time together.

Today we got to go to church together and have Sunday lunch before Robin and her helper had to go. It felt being in church with Robin and listening to God's Word together and singing Him praise. Hopefully we will get to experience it again, but time will tell.

This weekend was a different one for the quad life with many new memories. I don't know when we'll get to meet in person again, but this was at least a great start.
Posted by trainman at 6:50 PM No comments:

Most Sundays are very routine for me. My dad gets me up, does my morning routine, then gets me in my chair. After he and mom are ready, we maybe have a few extra minutes and then head off to church. Today started off like most other weeks, but it did not continue.

After morning church service, there was a monthly update from the church council that we wanted to stay and hear. About half the congregation stayed for the meeting and then everyone left after it was complete. My church has a small elevator that I and a some of our elderly members must use to get in or out. It can only take a few walkers, or one wheelchair, at a time and causes a bit of a traffic jam of people waiting to use it.

The first load went without any trouble and a lady with her walker got on next. Shortly after starting her descent, the elevator started making a loud noise. Some searching found that the ride went all the way to the basement, instead of outside, and the car wouldn't move. This has happened before, so it's not a big concern. The woman was helped up the stairs from the basement and could then go on her way. I was the only one left that needed it, so I watched as the routine of resetting the lift was underway.

After a few minutes and a bit of grunting from the people working on the mechanism, everything was lined up again. Unfortunately, the same noise returned and it was determined that it was a more serious issue than usual. This meant we would need to figure out a way to get me out. Every entrance has a flight of stairs, so it wouldn't be an easy task.

I drove over to the shortest stairway while dad and a couple guys talked strategy. Dad thought it would be best to reduce the chair's weight, so he laid me on a nearby couch. Staring up at the ceiling, I could hear my chair make a loud thump with every step they got it down. I didn't hear any crashes, but still wondered what the scene looked like.

A short time after the last thud, dad came to carry me down the steps and back to my wheels. I was glad to see everything in one piece and working properly. Today was one in the quad life of unexpected times and going with the flow.

I'm thankful that a few people were still available after the meeting and everything went well. God continues to show His plan, even when we don't know it's coming.
Posted by trainman at 6:02 PM No comments:

Every May, my town puts on a three-day celebration of its Dutch heritage and has thousands of tulips planted all over town. With the warm winter and spring we had, that meant most of the tulips bloomed early and were down to stems. However, a few flower beds were still in full bloom. 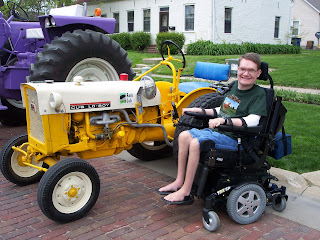 The weather was good for most of the festival, so I was able to get out for at least a short while every day. I did the tourist thing and noticed what flowers were still up and looked at the row of antique tractors on display. There were a couple that would maybe fit on my farm simulator, but one looked like I could almost drive right on and fit perfectly.

With any large event, you have to have plenty of food. I did my share of supporting local organizations by eating from a few of them and finding some new favorites. The real challenge, as with most years, was navigating around all the people.

Using a wheelchair means I take up a larger piece of real estate than most of the other visitors. It always seems that people notice me around, until they're blocking the path I'm trying to get through. Then they just stand and rarely hear me when I try to say "excuse me." To my knowledge, I didn't hit any tourists, just the back of my dad's leg once when he stopped faster than expected. 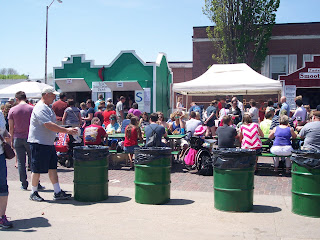 For the last few weeks, I have been looking forward to this time in hopes of being able to use my new evangelism training. I did hand out some gospel tracts to people, but never felt the opportunity to say much. I'm disappointed in myself that I maybe should have tried harder, but not sure how. If it's God's will, maybe a few opportunities will come this summer.

My assistant and I did learn one thing, remember sunscreen on my neck. With this as my first summer without trach ties, it's something we forgot and I have a small red spot to show for it. You can always learn something new in the quad life. It was nice to get out and enjoy God's creation and I look forward to more days like this to come.
Posted by trainman at 12:53 PM No comments:

Labels: life as a quadriplegic, meeting, public barefooting, relying on others

My Bible reading lately has been in the books of 1-2 Kings and 1-2 Chronicles. Both sets are the pretty much the same account of the history of Judah and Israel. Some kings followed God's commands and the country flourished with the king having a long rein.

Other rulers did not govern according to the rules given them. Some started out well, but then let power get to their head and did whatever they wanted. This cycle continued until God ultimately destroyed both kingdoms, but maintained a remnant that later came back to restart from scratch.

For the last several months, we have been seeing political news in the U.S. news. It has also been all over social media of people strongly supporting this or that candidate. Last night, with a popular candidate dropping out, Facebook has again been active with opinions. Some are vowing not to vote, others for an independent candidate, and all mixtures in between.

From what I've seen, no candidate is perfect and never will be as long as sin is in the world. As we have seen in history of God's chosen nation, the Israelites, He allowed both righteous and unrighteous rulers to lead for a time.

No matter what political landscapes look like, God's plan is what will happen. As a Christian, I will do what I can to see that we live according to the commands given. However, the quad life is short in this kingdom, with much more to come.

As time continues to pass and the world change around us, look at the many gifts we've been given and give thanks for all that we have. No matter what the future may bring.
Posted by trainman at 11:20 AM No comments: