In June 2019, I did my regular volunteer week at CHAMP Camp near Indianapolis. It was my 15th year as a counselor and a severe struggle due to the weather. When I got home that year, and even before, I decided it was time for me to retire my camping gear.

When counselor applications came in January 2020, I deleted the email with a very heavy heart. Just after they were due to be submitted in late March, the world collapsed. Another long-term counselor had also retired and said everything turned upside down because of us. This year, applications were distributed after much delay and planning. Again, I deleted my message as I still don't feel I could be much help anymore. A week later, the campgrounds CHAMP Camp used announced overnight camps were cancelled again, so that meant no camp for another summer.

It was quickly decided that CHAMP Camp would be held virtually and new applications were sent out for campers and counselors. Since I didn't want things to turn bad again, and wouldn't have to travel, I signed up to be a virtual counselor. The first meeting was on June 15 for counselors, but last week was the main virtual camp time.

A couple days just consisted of watching a video about an activity or learning something in nature. Three days were meetings with all virtual camp. Not many counselors were off work during the day, so only a few of us could login to join the campers. The first meeting on Monday consisted of following 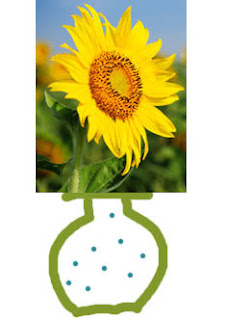 one counselor as she demonstrated an art project. As campers made their creations and showed them to cameras, I took screen shots and became the virtual camp photographer. Wednesday had another art project with drawing a vase on cardboard, making holes, and inserting flowers that campers found around their home. Between taking pictures, I tried my stick in Photoshop and made my own project along with the kids.

Thursday was the regular dance activity, but virtual. A DJ had been arranged, but was delayed in joining the group. After 28 years of being involved with camp, I'm familiar with some of the songs regular played and have a few in my own collection. Therefore, I started iTunes and had everyone dancing to "YMCA" while waiting for the official DJ. When he joined, he had internet trouble and gave me a link to his playlist on YouTube. I played the list as he adjusted it for camper's requests and became part of a DJ team.

While everyone missed getting together in person, I'm thankful we could at least have camp this way. Living the quad life means learning to adapt, sometimes quickly. I was able to help this way much more than I expected to and allow the campers to enjoy at least some form of entertainment. I don't know what another year will bring, but I am thankful I could participate with camp once again.

The street in front of my house has been slowly deteriorating the last few years and had become rough to drive on. Two weeks ago, equipment started appearing outside tearing up the concrete. A day after work started, a notice was put on the front door advising on street repair beginning in a few days.

Judging by other road work around town, I imagined it would take all summer for the project to be finished. However, watching out the front windows on my bike trips, I have watched concrete get broken up and loaded into dump trucks. The last few days, new cement was laid, cut, and now looks complete. I'm guessing within a day or maybe two, it will be open again. 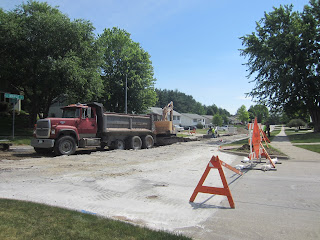 Watching the work literally outside my front door has been interesting. However, an excavator swinging cement chunks over our yard left a few deposits. Cutting new cement also bathed the yard and sidewalk with a layer of dust. Dad has been diligently cleaning everything so mom and I don't get dirty wheels and he doesn't hit rocks with the lawn mower.

This is the second year in a row dad and I have been home for Father's Day and not out at CHAMP Camp. I would like to be able to give him a day off, but it's not really possible. With no day help on weekends, he is the only one that can do my cares and the day feels pretty similar to any other.

Through all the years, I am thankful for all the blessings God has given me through dad. We have one Father, in heaven, who uses people He has placed in our lives just for the right purpose. Many of the campers, and now adults, with severe medical needs like mine have only one parent that stays around, if any do stay. Most often, it is the dad that leaves and mom gets the full responsibility of caregiver and provider.

On this day designated for dads, I'm thankful for the example mine has given. I know I can depend on him as a one-person mechanic for the van, bed, wheelchair, and pretty well everything I use. However, he also looks to God first and lets me drag him along to different churches I'm asked to preach at and hears some of my recycled sermons I use for first-time visits. I don't know what the week ahead will bring, but I can be sure dad will come home after 10-12 hours at work and continue to be someone mom and I can depend on.

In July 2015, I first used an FES bike for my legs. Since then, I have regularly used the system and written about on here before. In the nearly six years I have biked, my legs have pedaled over 1,450 miles over hundreds of sessions. Those numbers are impressive and I'm very thankful God has allowed me to do it. However, I have been concerned about other results during my times on the bike.

As a review, the bike provides electrical stimulation to my leg muscles through pads that are placed on them. A motor in the bike moves the pedals while giving stimulation. If my muscles react strong enough to the provided pulse, the motor turns off and my own body does the biking on my own.

Early in 2021, I had a number of times during my 30-minute ride that I would go for a full minute or more on off the motor. My legs responded to the stimulation correctly and were able to bike without the motor taking control. It also meant for nearly 29 minutes I was just along for the ride, but it was at least something. Unfortunately, my legs have gone lazy the last several months and only done 7-30 seconds independently each time. Biking is still great for circulation, some muscle building, and bone maintenance, but it's best if my own muscles can put forth effort and also burn calories. 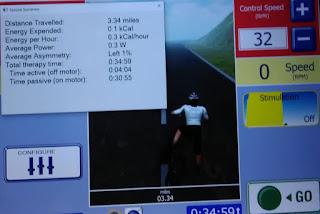 Thinking to my bike history, it has been 3-4 years since any of my stimulation settings were adjusted. On Thursday, I connected with a remote support therapist from Restorative Therapies (the bike manufacturer). The physical therapist took my history, connected to my bike's computer, and made a few changes. She slowed my speed from 40 RPM to 32, increased the power going to the electrodes, and other adjustments.

As I watched my legs slowly go in circles, I noticed the computer recording much more power coming from my muscles. At the end of the 35-minute ride, they had gone for 2:55 without the motor. On Friday, the time increased to 4:04 without assistance. Both of these times are new records for me in the years I've been cycling. I now go about 0.2 miles less per session with the decreased speed, but I would rather have quality than quantity.

Even though we live in a sin cursed world that includes disabilities, God has not abandoned us. I'm thankful He has provided technology like this bike to help with many areas. I look forward to this week's biking and to see what results come. After years of occasionally burning 0.1 calories, I may even double that amount for a full bite of ice cream!

With the world shut down last year, very few vacations were made by anyone. It has been getting increasingly difficult for my parents to get away anyway, and they weren't able to go on any of their regular trips. The year is half complete, but they were able to leave last week Sunday afternoon and returned yesterday evening.

The challenge for my parents is finding enough coverage for me when they normally are responsible. Five hours every evening and weekend days are hard to fill for several days in a row. However, for this week, one caregiver agreed to do three nights, my aunt and uncle two nights, grandmother and aunt one night, and another occasional helper Saturday evening. It's a precarious house of cards, but the plan allowed them to be free of the house. 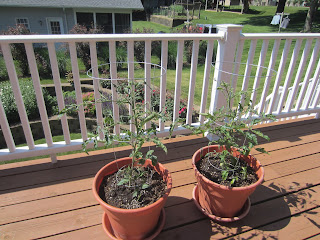 Sunday and Monday evenings were my aunt and uncle for three hours, and one of my older, retired, helpers was going to cover the remaining two hours. Unfortunately, she was sick, and unable to come, but my relatives were okay with staying longer and my day helper Sara covered one of the two-hour slots.

It was a great weather week in Iowa. Part of my household chores was watering flowers and tomato plants in various locations. I made sure they had good drinks and monitored the plants on the deck for at least 30 minutes a day. It meant sitting in the sun and enjoying the outdoors, but I was willing to make the effort.

Living as a bachelor, I tried a few new, and old, recipes for supper and found another option I think my parents would also like. Saturday evening came, and the scheduled caregiver didn't come at her expected time. Calling her, I discovered she wasn't aware she had been scheduled and was already busy with something else. Sara had already been with me for ten hours, but my helper that was feeling ill early in the week was well enough to come and sit with me until my parents returned.

In the quad life, some days get challenging and I have to quickly adapt and come up with solutions. I'm thankful my parents could get away again as they enjoy. The caregiver that helped three evenings is scheduled for surgery in a few days and won't be available again for a few months. Therefore, if they didn't go this past week, my parents may not have been able to go at all.

Now that everything has returned to normal, it's time to get back to other projects. However, those will be saved for future entries.

Labels: dealing with assistants, life as a quadriplegic, relying on others
Newer Posts Older Posts Home
Subscribe to: Posts (Atom)