I posted in early April about working on getting pressure mapping done with my chair's seat cushion. What started in March is now complete in late May, which is actually pretty quick for medical services. The final solution ended up being fairly easy as well.

In order to test a seat cushion, an electronic mat is placed on it and then I sit on top of it. The mat is connected to a computer that displays a map showing how much pressure is being exerted at all points.The results look similar to a weather radar with blue okay and red cause for concern.

After rescheduling once, I had my initial testing done two weeks ago. Arriving at the hospital, my assistant and I circled the parking lot a few times, along with other cars, unable to find a parking spot of any type, let alone an accessible one. We ended up parking on the street, but could only come up with $1.00 for the meter, or 80 minutes. I hoped the appointment would go quickly and not return to find a parking ticket.

Using three people to lift me up and slide the mat under me, results were surprising. Most of my seat looked good, but their was a bright red area directly beneath one of my pressure sores. Tilting back helped, but it still showed up red. One of the therapists felt the pad under me and discovered I was sitting on the metal base of my chair.

For the past 20 years, I've used a seat cushion called ROHO. It has small rubber pockets filled with air so the user sits on an air mattress. Mine had deflated enough that I was partially sitting on bare metal. Air was pumped back in and the reading improved, but not by much. I was told I should be making adjustments to the air weekly, something I never knew before. However, since numbers were still bad, it was decided to get a different seat type. This past Thursday, I went back for the new cushion.

This time, we found parking right up front and hoped inside would go as well. Once again, it took a small army to lift me up, take out my ROHO, insert the new pad, and the mapping system. This type was gel with a large hole in the middle to eliminate pressure completely. Sitting back up, the results were even worse. Not only was there pressure in the same area, but also now on the right side. It looked similar to recent radar in Iowa with recent storms coming through.

The new cushion obviously wouldn't work, so our attention returned to my ROHO. With rubber bands,  some cells could be tied off and mimic the hole of the other cushion. None were in the therapy room and the office could only find two, but the therapist got it to work. After another lift and seat transfer, I awaited the results. Now, everything was blue with a few light green spots. Tilting back had even more improvement with all blue.

After nearly two months of work, doctor's appointments, and approvals, all I needed were two rubber bands from the office secretary. Such are the experiences of the quad life. I'm thankful God has provided technology to help detect problems, but also for simple solutions. I will see what adventures await this week.
Posted by trainman at 11:59 AM 2 comments:

Labels: health, life as a quadriplegic

On Sunday, my parents were able to get away for the week on vacation. That means I had the house to myself for a few days. Unfortunately, I was too busy to enjoy most of the free time.

Tuesday, I spoke with physical therapy students. It has been a few months since I talked with college students, but I reviewed a few times and felt ready. The instructor introduced me as the best speaker of the year, even better than the instructor. From that evaluation, I'm assuming I am the only guest speaker that comes. The class of 16 students went well and had good questions when I finished.

I had two days on my own, with assistants of course,but had household chores of getting groceries, mail, taking out the trash, and checking the back deck. After 45 minutes with my legs in the sun, I determined the deck was fine.

Friday had another school, but third graders this time. Going from college to grade school takes adjusting, but it went well. The weather was forecast to be warm again and I didn't think the small private school would be air conditioned. Therefore, I changed my normal speaking outfit of khaki pants for shorts.

One student asked, "What happened to your legs?" before I started. I did my normal routine of explaining about my injury, but he asked again later. I tried saying I don't use the muscles in my legs, which makes them small. However, I'm still not sure I understood, or answered, his question. Another student dozed off part way through my time and never responded. That was a first for me, and one I don't care to repeat.

Mom and dad returned again Saturday evening with stories about their travels. I'm thankful it worked out for them to go and the extra help I had in the evenings. With everything I had going, it didn't really feel like a vacation week. My calendar looks just as full for the rest of May, so I won't be getting a break any time soon. As I told students this week, just because someone can't move doesn't mean they can't be active.
Posted by trainman at 12:00 PM 1 comment:

Labels: giving back, life as a quadriplegic, regular life, relying on others

In the quad life, it's hard to describe what every day challenges are like and few people understand regular frustrations. Therefore, we often socialize with other quads, and families, that know what daily life is like.

For kids with spinal cord injuries, and often adults, their mothers tend to become their biggest advocate. These moms often perform all the medical care, handle funding battles, and notice personal victories, no matter how big or small. Every true mother cares for her children very much. However, the bond seems to grow stronger when the son or daughter has significant challenges. On this Mother's Day, I know two moms that are feeling the grief of losing their child. 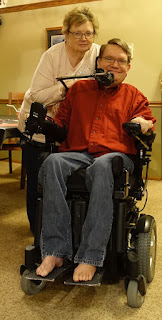 In March, Aiden passed away after a sudden problem at school. He was ten-years-old and had lived with a high level spinal cord injury for about nine years. I am friends with his mother on Facebook and have been seeing the grief of going from daily caregiver, to nothing.

Last week Monday morning, Margaret passed away after a short battle with respiratory issues. She was 15 and also had been a quadriplegic for ten years. With her funeral yesterday, her mother, and family, is just beginning to experience a new life without her daughter.

Like these families, I rely on my mother for a lot and am very thankful to my mom for all that she has done. Shortly after returning home from our accident in 1985, she started monitoring paperwork, and my medical needs, while still learning her own injuries.

Now, mom spends 20 hours a week on just paperwork for my nursing care. Add to that meal preparation, planning, and taking care of the house. Mom does very well with the circumstances given to her. I'm thankful God decided to bless my life with her and am very greatful for all she does.

As you go throughout this week, remember your mom and all those living in difficult circumstances. Finally, remember mothers that have lost their children, at any age, and that today may be an added difficulty.
Posted by trainman at 12:00 PM 1 comment:

Last week, a friend shared a blog post giving ten reasons to date a disabled lady. I don't necessarily agree with everything, but it was an interesting post, but I noticed it didn't say anything about guys. Therefore, I was challenged to come up with my own version. It isn't ten, but these are a few points I would include.
Above all, I put God first in my life and would treat a potential partner according to His word. The quad life has many challenges, and they would be hard for anyone to enter into. However, we can offer a full, loving relationship as other men. I don't see me getting to experience this part of life, but gladly live in the world God has given me.
Posted by trainman at 12:00 PM 2 comments: