A lot can change in a week, and this one made progress toward getting more help. I won't have every open shift filled, but anything helps.

One of the schools I contacted had a student reply that she was interested in helping me. I looked at her resume and gave a few of my quad life videos that show some of what I do. I liked what I saw and watching my cares online didn't scare her off, I interviewed the student last week. Now, she is scheduled to come in a few days to start training.

It has been over two years since I last trained anyone, and that was a different situation. The new caregiver was a home care nurse already and had several year's experience. He was also trained by my other night nurse who has worked with me for nearly two decades. Sara is the one who usually trains day and evening caregivers, but she is still out on leave.

Any nurse with experience will say home care is much different than working in a facility. For example, I reuse equipment that hospitals normally use once and throw away. One common item are med cups. I'm the only one using them and I take the same medications almost every time. Therefore, I use a cup, it goes through my cleaning solution, and then back on the shelf for another round.

When teaching how I do everything, I'll need to remember to emphasize school will say to do some things completely opposite of what I do. However, this will hopefully be an excellent learning opportunity to gain experience and work with different technology. To my knowledge, their are only a handful of people in Iowa that use a diaphragm pacemaker. I'm excited to have the opportunity to teach and get more help, but also pray I don't lead her astray somehow.

Due to class schedules, the future nurse can only do one full day and one afternoon a week and only until school finishes in May. That will be another 15 hours per week covered out of the 30 that's missing and will be a big help in the quad life. I'm thankful for God's blessings and pray everything goes well with showing my care routine. I also pray her paperwork with the state will also be complete before summer break. I will see what comes for the next few months and give thanks for what I have.

Labels: celebrating, dealing with assistants, life as a quadriplegic

More snow that must go

It's winter and I'm in Iowa, that means cold temperatures and snow. We have not had record amounts like some areas, but we are still receiving a good amount.

As predicted, snow started falling early Friday morning and continued for most of the day into Saturday morning. My Friday night nurse called off early in the day due to projected snow totals and road conditions. Since she drives quite a distance, so my parents and I expected that would happen.

Therefore, after nobody to help during the day, mom and I stayed up until about 2:30 Saturday morning. Dad then took over after getting a good five hours of sleep and got me ready for bed. He then started my morning routine a little after 8:00 and immediately went to clear snow after he was finished with me. Dad spent all of Saturday morning, and more, taking care of snow around the house and then at work. 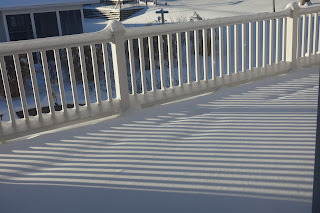 It is nice watching snow through webcams in other areas, and even out my window, but I don't like when dad gets stuck with continues work. While I was up Friday night into Saturday morning, I watched a documentary called "The forgotten children of Ukraine." It covered children with a wide variety of disabilities that were given up by their parents and put into orphanages.

The conditions and medical "care" they received were horrible, even with an orphanage director that worked to help them. When children became adults, if they survived that long, they just went to other institutions and never out in society. One wealthy individual was trying to help a few people escape the system who appeared to not have any physical or cognitive challenges.

I'm very thankful for the parents God has given me as well as living in a country that does help people with disabilities, even if not as we would always prefer. I pray for these children in the video and saw a few comments that some of them had been adopted and were doing better.

Whatever challenges come this week in the quad life, I will remember try to always remember to give thanks in all circumstances. I am also looking forward to spring, which comes closer every passing second.

Labels: dealing with assistants, living in a society, regular life

Not what was hoped

For over a month, my parents and I have been anxiously waiting for January 6 to come. It was when Sara had her doctor's appointment and could hopefully get released to come back to work. Unfortunately, she didn't get the news everyone wanted.

In order to be cautious, Sara's doctor wants to wait longer. She has a few weeks of therapy and then another test scheduled for sometime in April. If it is that long until Sara can return, that will mean six months without having regular coverage.

So far, it has been over two months since I last had a week of day shifts covered. The three of us are getting through, but it is getting more difficult as time increases. I realize this has been a common theme in several posts and it may be a little annoying, but it's the primary thing going on right now.

Normally, I would be starting to contact schools to get scheduled to come in spring. However, without knowing caregiver status, I don't think I can contact many. Also, my parents have trips that they want to start planning, but can't for the same reason.

Sara is hoping to contact her doctor again after therapy and see about returning earlier. With colleges back after Christmas break, I also contacted a couple local schools with nursing programs. I at least received responses from the department chairs I messaged, which is better than when I ask about coming to speak. I don't know if any students will be interested, or could actually help during the day, but I pray someone will be available.

I have also started thinking a lot about looking at nursing homes. It would hopefully only be temporary, but I could see potential of losing at least one of my night nurses if it was more than a month. In that case, it may become a permanent move.

Whatever comes, I keep reminding myself God is in control. My family has been very blessed to have so much help that has allowed us to be very active. We are now in a season where God is allowing us to trust Him and what He will provide.

With well over three decades of the quad life, I have had times that appeared to be dire and ended up very good. If nothing else, whatever happens in this life is like a blink of an eye compared to eternity. I will see what another week brings and continue to pray for further assistance and for Sara's health to improve.

Labels: dealing with assistants, life as a quadriplegic, relying on God

Looking Back at the Year Past

Just a week ago I was posting about Christmas and now the new year has already started. These are times good for reflection as well as looking forward to what may come.

In 2021, I had my record number of times preaching. I remember early in the year that I was wondering how much I could do with lock downs uncertain. I'm thankful that I had the opportunity and I pray that I will be able to preach more this year as well. However, I may be a little more selective depending on my responsibilities for the service and how many I do in a row.

The second record for the year is one that pretty well only I would care about, but it is still noteworthy. Thanks to the COVID lock downs from 2020 spilling over to the next year, I didn't get out to church in person or hardly out at all in the winter. Combined with a warmer spring, 2021 was the first full calendar year I went completely barefoot. 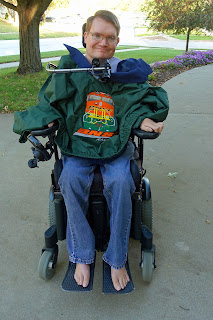 When cold weather comes, I dread having to put on footwear and endure the increased muscle spasms and frequently getting stuck, unable to move, while my neck is stiff and I can't move. If I can continue to only go out on warmish days, I'll reach two years of being free from footwear in late February. I definitely still have spasms and stiffness when barefoot, but anything I can do to decrease them without more medication is a good thing.

An unfortunate record was the most open nursing shifts that I can remember. Except for one day, it has now been two full months since Sara has been able to work. My other day caregiver took a few extra shifts, but three days a week have mainly just been my parents. Sara has an appointment late this week and I pray she is able to return on at least a limited basis.

This year has started off with a sudden switch to snow and bitter cold with today's church service cancelled two days ago. New Year's Eve had no night nurse, but thankfully she was able to cover last night.

I don't know what God has in store for the quad life this year, but I know it will be according to His plan. I hope to continue to post here every week and keep track of what has been happening. Have a great first week of 2022!