It has been over a year now that I have been doing my up and down routine. I'm usually sitting up in bed by 8:00 in the morning and then flat again at 10:00. I once again go up at noon and two hours later flatten out. At 4:30, I again up until we finish supper about 6:30. Finally at 8:30 in the evening I sit for the final time of the day before "going to bed."

While flat I can work on my computer some, but not with enough precision, or vision, for work. Therefore, in the morning down time, I either play a game or watch something. I much prefer to be at least somewhat active, but after playing Minecraft or Farming Simulator for two hours, my mouth and trach are yelling at me loudly with pain. In the afternoon I often read, and evening is same as morning. For a lot of these times though, I've been watching a gaming group called TebbyBear Broadcasting, and especially the co-founder who goes by Der Tebbers.

Der plays several simulator games on his YouTube channel that I either have, currently do, or would be interested in playing. It's not as fun as actually playing them, but it does help to make the time pass. He also makes the videos entertaining. I might be a quadriplegic due to the car I was in getting hit by a semi; but it's still fun to watch a truck fly all over the road and end up anywhere it wants.

For three to four days of the week, Der also does live shows on Twitch. They correspond very well with my evening down time, so I often watch them. When I'm laying flat, it's a challenge to be able to do chat, but it's still something to help pass the time. I also can't see what I'm writing when I do interact with the audience, so I try to be careful what I say.

Thankfully, the skin problems do continue to show improvement. It may only be one cell per week, but it is the right direction. I'm very thankful that I can at least do some while flat, but appreciate my sitting time. Hopefully a time will come when I can actually work more and be upright longer. Until then, my quad life continues with its ups and downs.
Posted by trainman at 3:36 PM 2 comments:

After World War II, many soldiers came home and started families. Everyone is likely familiar with the baby boom generation and hearing various reports about this generation. Now that the majority are at or over retirement age, medical needs start to increase. I've been noticing this for a few years, but it's really starting be obvious.

For about the last month, let's say I've been having plumbing issues. I've talked with my doctor's nurse a few times and we've adjusted my meds, equipment, and schedules. This has helped, but problems still exist. Therefore, we concluded it's time for an actual visit.

When I called on Monday to setup an appointment, the earliest I could see my doctor, a specialist, was August! This sets off a scenario in my head:

Me: "Hey doc, I'm having some major problems and need to come in to see you."

Doc: "I agree, I'll schedule an appointment for you in five months. If you're still alive, I'll see you then. If not, be sure to cancel so someone else can take the time slot."

Fortunately, there is a nurse practitioner I can see next week, but this is getting nuts. The doctor's office has a waiting room about half the size of my house and it's often 75%-80% filled. Maybe with the aging population, more services will become available, but that could be a while. My schedule isn't much better though.

Yesterday, I was supposed to have been in a meeting at church. Unfortunately, the group leader couldn't come due to recovery from a surgery. It took about a dozen emails to find an evening next week that I'm free as well as a majority of the group. I'm also working on lining up some college speaking visits this spring and attempting to find open days.

You would think that since I'm living the quad life and have a minor annoyance of a body I can't control may result in an open schedule. I am better than some people, but it does get to be tricky. We'll see what time becomes available for next week's post.
Posted by trainman at 4:17 PM No comments:

Last week was basketball tournament week in Iowa. Therefore, I had to endure sports stuff when the regular news stories were on. Apparently there were some close games and the sportscaster showed a room full of people yelling and screaming and acting in obscene manors.

I have absolutely no interest whatsoever in sports of any kind. If a petition came up to ban sports, I would be the first to sign it and gladly work to promote it. Watching these people last week is a confirmation of my position.

What was the point of all the obnoxious yelling and screaming? Did a new medical breakthrough get announced to cure cancer, Alzheimer's, or spinal cord injuries? Did someone show the many problems with evolution and admit the Bible is God's word? Those are things to cheer about, but this was just some game that has no lasting impact on anything.

Close anyway, the coaches likely got large bonuses for taking students away from academics. In another few months, the insanity will start again. The previous year's celebrations won't matter and it goes from year to year. Some of these people can likely tell you a bunch of statistics about different people on the team. I wonder if this same person could give any information on the statistics of St. Patrick's day.

We're nearing the end of the day when a lot of people drink green beer and wear green clothes. It's fun to celebrate a holiday, but it's also good to know who we're celebrating it for. St. Patrick was started out life as a slave, and was basically an atheist. Through his time of labor, he learned to love the Lord and became an ordained bishop. He then went back to Ireland and started many churches and baptized 120,000 people.

This day we celebrate was to commemorate his death on March 17, 461. That is a reason to celebrate and give thanks. If you're one that gets into the whole sports thing, remember to keep your perspective. Be careful to cheer for the things in this lifetime that actually matter, whether you live the quad life or not.
Posted by trainman at 7:44 PM No comments:

I read an analogy once by a paraplegic. He concluded that down to about mid-chest he was himself, below that was some guy he had no control over named Ervine. I liked the idea and applied it to my own life. Since my other half is constantly crossing his legs Indian style, I gave him the name Tanto.

This leaves me with control of my head, mostly, and Tanto with pretty much everything else. When I talk to older kids and adults, it works as a good illustration as to what everyday life is like. I can see everything below my head, but can't control any of it.

Every day I watch Tanto kick, slap, grope, and pinch those trying to take care of me. I do have ways of keeping him under control, but they only go so far. One of my assistants has taken the idea a step farther and named every limb. It can get somewhat comical talking to different limbs telling them to behave. However, they rarely listen since I keep control of the ears.

Living in a body I can't feel or control gets to be very frustrating some days. Having fun with the situation can greatly help to make light of what can be taken as a complete negative.

Throughout my life, I hear every now and then about breakthroughs in spinal cord injury research toward a cure. I honestly don't believe that will happen in my life, at least not for old timers like me. I do look forward to the day when I will be finished with this body and be fully restored in glory. Until that day, I just continue to live the quad life as given.
Posted by trainman at 7:18 PM No comments:

When I talk to school kids, I tell them I can't control my body, but I use adaptive devices to do things. I then describe some of my devices, like wheelchair, diaphragm pacemaker system (DPS), mouthstick, etc. In 30 years of living the quad life, I've gone through a lot of hardware.

The most obvious piece is my wheelchair. I've heard some people get new chairs about every five years; I'm on my second powerchair. I can't imagine having gone through six chairs by now. My first one had a mind of its own and took off by itself a few times. I've had my current one since about 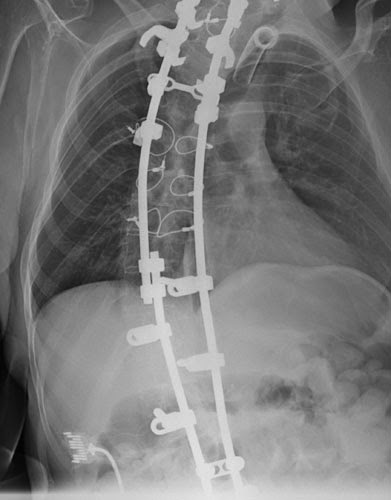 1996 and it has served me very well. Neither chair would have lasted nearly this long without maintenance from my dad.

Two weeks ago, we were getting ready for church when my chin control wouldn't swing away. Within a few minutes he found the broken wire under the front of my seat and had it repaired. We were off again and got to church with time to spare. The external hardware is rather obvious, but it's the internal parts that are just as useful.

In early high school, I had severe scoliosis (common for young kids with SCI) and had an 89° curve in my back. After getting rods in my back, I grew six inches in seven hours and went down to a 30° curve. The DPS with wires in my diaphragm allows me to breathe more naturally. Followed by my trache that I used for many years for breathing and still do to clear out my lungs.

I'm thankful that God has given us technology that allows people with injuries like mine to live, and go out and interact in the world. It's a major problem when they malfunction, but fortunately that isn't often. Living the quad life isn't easy, but through the many adaptive devices I use, it makes it possible to do more than people imagine.
Posted by trainman at 7:31 PM No comments: