Scoliosis is a common problem when children, and adults, have spinal cord injuries. I followed the trend and as a result had rods put in my back in early high school to help straighten me up. It helped a lot, but I will always have somewhat of a curve to my spine.

When I had my rods placed, the back rest in my chair was custom molded to hold me straight. It worked very well, but it didn't fit on my new system.Before getting the update, my old back was scanned and was supposed to be copied over, but that didn't exactly happen.

My parents and I noticed quickly that my shoulders didn't sit as straight, but I didn't think much of it and wasn't too concerned. Unfortunately, that has quickly been changing the past few months.

As part of my back's curve, I can't turn my head to my right very far. I noticed early this year that my range of motion has been getting worse and we're quite certain it is due to my chair. I was fitted for a new back in late May, but now over three months later I am still waiting to get it. A couple weeks ago, my mom and I took a roll around the neighborhood to enjoy the evening. Halfway through our four block trip, I could hardly even keep my head straight to drive my chair.

I'm already up very little, but now I try to be even less until the new system comes. I am thankful though that I can still get up and out and that different supports are available. In order to try to counteract the twisting, I turn to my right as far as I can and hold when I'm not doing much. It looks kind of odd to be looking the opposite way of the TV or computer I'm watching, but I figure it doesn't hurt.

It has taken two years to get to this point and I know a new back rest won't be an instant fix. Hopefully it will improve with time, but I'll see what God has planned for this part of the quad life.
Posted by trainman at 12:06 PM 2 comments:

Labels: life as a quadriplegic, relying on God

One of my typing memory verses is Proverbs 27:1, "Do not boast about tomorrow, for you do not know what a day may bring." Due to this and other teaching, I always try to say I'm planning or scheduled to do something and not to say it will happen. That especially came true this week.

Sunday, my parents and I were getting in the van to head to church. Dad was just putting the lift up and it stopped moving. He tried all the controls every direction, but it wouldn't budge. After about 20 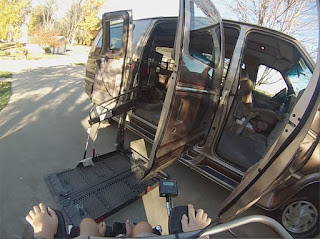 minutes of messing, he was able to get mom and I free of the van, but the lift was far from being functional again.

I was scheduled to volunteer a shift at the Iowa State Fair Tuesday morning, but dad already concluded Sunday that the lift wouldn't be a quick fix. Fortunately, another volunteer I know was able to take my shift.

As the week progressed and dad continued to diagnose the problem and find a solution, the news kept getting worse. The model of lift I use is no longer manufactured and parts are not available. New lifts for full-size vans don't allow me to sit up front like I do now, so that wouldn't be an option either. I was also hoping to head to the fair for a fun day Thursday, but that came and went as the lift saga continued.

Thursday evening, dad ruled out one possible problem and figured out one particular motor was causing the issue. After help taking it apart, he could easily see some electrical contacts had worn away over the years and was the culprit. After retrieving the equivalent part from my old van lift in storage, he had everything working again by Friday evening.

It proved to be a full week of trusting God and what he had planned. I miss not being able to help during my shift, but I'm very thankful that dad has been given the mechanical knowledge and ability to fix pretty well everything I use. We went from possibly needing to look for a new van to simply swapping out parts that were already on hand.

Living the quad life has challenges like this week, but I'm thankful for having reliable transportation once again. Hopefully this week will be a little less eventful, but I'm not the one in charge.
Posted by trainman at 11:55 AM No comments:

This past week has been a stiff one in the quad life. I have had more time to sit and take in my surroundings as a result.

On one of my forums recently, someone asked if anyone had noticed muscle stiffness and spasticity increase with age. I am leaning toward yes with the past few months.

After sitting in one place for a while, I expect to be stiff when starting to move again. Sometimes just an arm will twitch, other times my neck will become like cement and I can only move my eyes. The most fun is when legs and arms fly and and then my neck gets stiff afterward. The result is I end up sitting wherever I am and have to wait until everything loosens up.

On Wednesday, I had a few things I needed to get so my assistant and I headed to Walmart. Getting up in my chair, I was a little jumpy, but not bad. After arriving at our destination though, I could tell it would be a long trip. Every tiny bump in the cement or just going down an aisle I would tighten up and have to sit for 30-60 seconds before moving again. My body was acting like it was winter and I was wearing shoes and not liking cold temps. Unfortunately, being barefoot and not sitting on wrinkles wasn't helping.

Thursday was my first day to volunteer at the Iowa State Fair. The first hour went well, but as my morning meds wore off the stiffness started to return. I had gospel tracts under one hand that I had people pull out as I talked with them. Thankfully, nobody got kicked, but I had a few strange looks as to why I was talking strange sometimes and not moving my head.

Hopefully something is just being irritated and this phase will pass. I'm scheduled to be at the fair again this week and it would be great if I could be a little more mobile. Whatever happens, I'm thankful I can still get out and be active. As long as I'm not in the middle of the road, being stuck in one place for a while lets me see more of what's around me. I'll see what this week brings and go with what I'm given.
Posted by trainman at 1:30 PM 2 comments:

Labels: barefooting, getting older, life as a quadriplegic

On every July 4, I watch the movie Independence Day during my flat time. It's an older movie, but the world is saved from alien invasion and wins independence. I enjoy some science fiction for entertainment, but I think a few people have been watching too much.

In late July, astrophysicist Stephen Hawking said aliens would kill us if we tried to contact them and we should stop trying. Just this week, NASA announced a new position they want to fill for an Earth defense from aliens. The job pays $124,000-$186,000 per year.

I wish I could say I was making this up, but truth is often stranger than fiction. People that are supposed to have the top minds in science are actually believing aliens exist, of which there's no evidence, and are trying to protect us from them. However, they say that believing God created the universe in six ordinary days a few thousand years ago is preposterous.

Ever since I heard these news items, Romans 1:25 has been going through my mind, "They exchanged the truth about God for a lie, and worshiped and served created things rather than the Creator..." Those that reject God will believe absolutely anything, as long as it does not involve the supernatural. This is what is being taught in schools as well as movies and TV shows.

It's very tempting to wonder why we search for intelligent life in outer space when we can't find it here. The correct thought though is sadness and prayer that they will find the truth while time allows.

This week, I'm scheduled to volunteer a few days at the Iowa State Fair at the Ark Encounter booth. I don't expect to hear much about impending invasion, but I'm praying to get to talk with a number of people. Living the quad life can be a challenge, but I can still work with those that need to hear the good news of salvation. Maybe I should apply for the opening and teach the true defender of all life on earth.
Posted by trainman at 11:39 AM No comments: