This post is number 53 for the year and the last one for 2018. I don't get into new year resolutions, so I can't say I have any upcoming plans on changes.

In 2018, I was able to read through the entire Bible twice again and also read the New Testament an extra time. I'm debating on what to do for reading plans next year, but hope to increase my time of study of God's Word.

For the last month of advent season, I have heard sermons from various churches through different sources. Unfortunately, not all of them were based on Scripture and used video resources or songs as the message topic. I did come across a channel on YouTube that has material I could see using as future sermons of my own.

As I currently sit, I don't expect that 2019 will have much, if any, for trips happening. The two this year were a challenge and as time passes, they won't get easier.

I am praying that my nursing coverage will improve in the new year. I'm very grateful for all the hours I have covered and all that God has allowed me to do. This year had 35 shifts, day and night, that were not covered. I'm also very uncomfortable with one of my current providers, but she at least comes and allows my parents to sleep.

My primary night nurse is now starting college classes part-time and will be moving on to another career. That will mean four nights a week that will need to be covered when it's already a struggle.

Whatever comes in the next year, I can be assured that God is in control. This has been a year of ups and downs in this quad life and that will always continue. Thankfully, the infection I had last week seems to be clearing up and with only another day remaining for medication, everything has worked well.

Have a very blessed 2019 readers. Thank you for coming along with me in this journey and whatever comes next!
Posted by trainman at 12:00 PM No comments:

Labels: dealing with assistants, expectations, health, life as a quadriplegic, relying on God

This has been one of the weeks of unexpected times. Some have been good and others not so much.

On Tuesday, my nursing agency's supervisor came for her regular 60-day re-certification check. Part of her routine is checking my skin and tracking progress of wounds. I was thankful to hear that all three are smaller than the last visit. It's nice to verify that all the flat time is beneficial.

For the last few weeks, I have been noticing a foul stench coming from my lungs (not my breath). I thought it was time to get checked out before Christmas and saw my doctor Wednesday. He put me on a general antibiotic until test results returned. The one he chose is one that I've reacted to in the past, but thankfully I haven't had any problems. If this blog goes silent for a few weeks, then I would guess trouble came later.

Results came back Friday with infection of MRSA around my trach button. He stopped the original med and started me on another for ten days. This is starting to remind me of the scenario from September. I'm praying that I'll skip the hospital stay this time and just finish everything as scheduled.

This wasn't the plan I had for the week leading to Christmas, but I'm thankful for the news of improvement and for help for problematic bodies. I'm most thankful though for the gift of the child in the manger.

Comparing this quad life to God's moral law, I know that I don't deserve the many blessings I have been given. Thankfully for me, and everyone who believes in Him, God sent His son as a child to earth. Through His sacrifice and conquering of death, we may have the free gift of salvation.

It is increasingly rare anymore to hear "Merry Christmas" and the true meaning of Christmas. We need to be careful this week to take time to remember Jesus' birth and that everyone needs to truly repent of sins and take the gift we've been given.

I like getting notes at Christmas with updates on what my friends and family have done throughout the year. Now that most people use social media to connect nearly every minute of the day, letters are pretty rare.

Around 2007, I started doing my own annual review and then send it out by email and make it available on Facebook. So I guess I do a hybrid of sending out letters and updating online. I spent a few days this past week getting this year's reflection complete and sent out.

Paying web development work has decreased again this year so that I'm now down to only two regular active clients. Half of them are volunteer, so I only end up officially working a little over an hour per month.

However, in 2018 I have preached eight times, spoke at five grade schools, six college classes, and the Iowa Lung Conference. Where one form of work is decreasing, another is increasing. I did not plan it that way, but I trust God's leading in every aspect.

Also this year, I was able to make two trips, one to camp and another to the Louisville, KY area. My pressure sore didn't do well with the increased activity, but at least I could go and enjoy these times. The sores are improving, so they at least weren't brought to the point of no return.

This year I also saw the passing of other quads, a camper graduate, and several in the hospital with serious problems. I'm thankful to have had only one hospital stay this calendar year and to have pretty good health (at least for a guy who isn't breathing).

It has been a year of blessings, along with a few frustrations. The last few weeks of the year can get pretty hectic with Christmas and New Year celebrations, but I'm looking forward to them and what may be ahead. I never quite know what to expect living the quad life, but it's rarely boring at least. With just over a week to Christmas, I look forward to final preparations ahead.
Posted by trainman at 12:00 PM No comments:

Labels: health, life as a quadriplegic, looking back

This week will mark one year since I started doing FES (Functional Electrical Stimulation) bike therapy at home. I did it for over two years in Des Moines before getting it here and am thankful for the access.

After I complete a bike session, it uploads to a database and records my activity. I get an email report every week as well saying what my stats were. Some activity doesn't get recorded due to internet errors, but most of them get recorded. 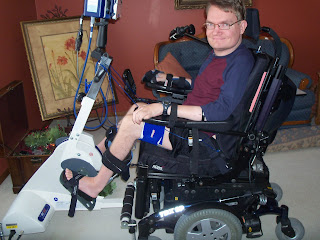 My very first time on the bike was July 13, 2015. Since then, I have done over 184 rides for more than 550 miles. In the last year, over 100 of those rides and at least 337 miles were done at home. Despite that much traveling, I can't say I've seen much different scenery.

When I was originally injured in 1985, technology like this wasn't even imagined. I'm thankful God has given us the ability to make such devices to help those of us in the quad life or other challenges. Looking at old pictures, I can tell how much my legs have grown in thickness with muscle and improved circulation. I can also see that my feet lay straighter in bed and are more flexible with the increase in use.

If I'm not traveling and sitting a lot, my pressure wounds also heal faster when I get to ride. My doctor attributes much of the improvement to more active muscle movement when cycling. With my first experience in 2015, it was a great feeling to have my legs moving again. I still stay on it a little longer sometimes just because it feels good.

For the next year ahead, I don't know what God has planned. I'm thankful for the time I've had and hope to be able to continue for many more miles to nowhere. This coming week will hopefully provide answers to a different issue, but that will be another post.
Posted by trainman at 11:59 AM No comments:

Labels: barefooting, health, life as a quadriplegic, looking back

The calendar says winter doesn't start for another three weeks, but you can't tell by looking outside. Last week Sunday, church was cancelled due to a winter storm, and this weekend isn't looking much better.

Just to my east, a few towns received 15-17 inches of snow in a few hours, We only got about 2-3, but it still ended with my night nurse not able to come and Monday's day nurse coming late. Now this weekend started with rain and wind most of Saturday with another inch or two of snow predicted today.

Weather has different affects on people. Some love the snow and say it's a reminder of God washing us clean and whiter than snow. I do agree that watching snow fall can be pretty, but it often results in my caregivers not being able to come. It also serves as a reminder of cold conditions outside and why I hibernate during winter.

When I visited the Ark Encounter in October, the first level had sounds like a raging storm outside. I have experienced strong storms that may last 30 minutes or more, but can't imagine what it would have been like for at least 40 days and nights.

I have read a few places about the climate changes from Noah's flood would have setup conditions for the ice age to follow. Blizzards like Iowa has received would have seemed very tranquil to what likely happened in this same area during that time period.

Summer storms or winter weather, each should remind us of God's creative power. I believe the world is still stabilizing since these events and should expect changes yet to come. I look forward to a time of little to no snow, but that's likely going to happen in this quad life.

Whatever is predicted and then actually happens this week, I will be thankful I live in a warm home and that I can choose to stay inside.
Posted by trainman at 12:05 PM No comments: