In late September, my maternal grandmother moved from her house to a retirement home closer to us. She decided to sell her house and my parents, uncles, aunts, and a few cousins have been working to get the property empty and ready for showing.

On Thanksgiving, we got together with mom's side of the family at grandma's new place. Part of the conversation was about working on the house and dividing up items to whoever wanted them. Some of my cousins put their names on various items, but also their children's names for some of the toys.

Dad looked at a few things that he said looked like unique antiques. However, since he wouldn't have grandchildren to pass them down to, he didn't feel right taking them. I've heard this comment more than once in the past few weeks.

Yesterday, my dad's side got together for our annual combined Thanksgiving and Christmas celebration, or thankmas as we say. I like seeing my family again, but part of the discussion from cousins of my age are about their kids and what their family has been doing.

It should be apparent from this blog that I love kids and enjoy working with them. In high school, I had the typical dream of wanting to get married and have children of my own. However, that is extremely rare when living the quad life and I have not escaped the trend.

I'm thankful for all the kids God has allowed me to speak to at schools and church, even though it's only about 30 minutes at a time. I had always prayed to have my own to teach, but that doesn't appear to be likely.

As we continue in this season of thanks and celebration, we need to remember it is not always a time of joy for everyone. I've learned to be thankful for the abundance of blessings God has given me and to not want more. Hopefully in 2019 I can continue to work with schools and get to be a parental influence if just for a short time.
Posted by trainman at 12:00 PM 4 comments:

Labels: getting older, grandparents, life as a quadriplegic

In September 2017, I received my license to exhort, or preach, in the Christian Reformed Church (CRC). My first sermon was a few months later on November 12, 2017. In the year since I first preached, it has been a unique experience.

Last week, I watched an evening church service online. It was a man who had recently been licensed and was preaching at the same service I started. Since then, I have preached at seven CRC services, once at camp, and two back-to-back services at a Methodist church. The total of ten times puts me nearly the same number of schools I have spoken at in a year. 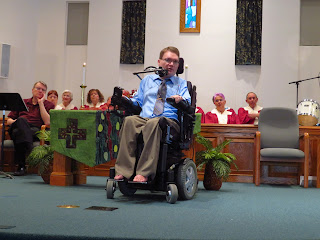 So far, I have not preached more than twice at a single church. Therefore, I have only prepared two messages and have just reused them. Staying in one church, most pastors can't get away with this, but it has helped me get familiar with preaching and not simultaneously make a new sermon each time.

My goal for this winter is to write at least two more messages. I have ideas in my head, but so far they haven't come through my stick to get fully written. Every time I plan to start, something else comes up or I can't get my thoughts to focus on the task.

Every time I preach though, I'm thankful for the opportunity. I know I don't have a clear voice and can be a little hard to understand, but God continues to use me for His purpose. So far, I have only had to turn down one request due to a church sanctuary not being accessible.

I recently read an article that private schools and churches are exempt from the ADA and therefore don't always make an effort to allow access for all. However, two of the facilities I visited made ramps for me to get up on stage and one already had a ramp built-in. Maybe the preaching quad life will raise awareness that all areas of a church need to be accessible.

What may come in another year, I wouldn't try to guess. I pray that I can continue to preach more as well as continue volunteering at outreach events in my area. Only God knows the future and I'll continue going along His plan.
Posted by trainman at 11:59 AM No comments:

I received a message from my friend John this week saying I needed to edit my blog. In the about me section, I have written "In my short time..." He said that my time has not been short and that I'm now old. I was quick to remind him our age in years is currently the same, but I do have a little over nine months more.

On Facebook, I'm regularly seeing memes that show various items and say if you remember, or used, this item, you're old. I'm not familiar with every item and can very honestly say I have not physically used most of them. As I have said before, I do somewhat think age is relative.

In a few weeks, I will be celebrating my 37th birthday (if I make it that far). That means I have doubled my age since graduating high school. There are also events that are clear in my memory, such as Y2K and 9/11, that are now in history books and college freshman did not experience first-hand. Looking that way, yes my years are not short and have accumulated a good number.

Looking the other direction, I have only been in a career for half the time of my peers. Granted web development as a career option hasn't been around for 40 years, but I'm thinking in general. For speaking and preaching, I'm only beginning to scratch the surface of those that have been working for over four to five decades.

Just like when I look at groups younger than me, my parents and grandparents remember events that happened before I was born or very young. Looking at both sides of the coin, I would put myself about in the middle.

As far as quad life, 33 years post injury does place me in the old man category. In the past few weeks, a few minor issues have come up that do show I've had several decades in this life and have experience to help others.

By the time you read this, I will likely have changed the about section by removing one word. In any case, I'm thankful for the years God has given me and look forward to using my remaining time according to His will.
Posted by trainman at 11:59 AM No comments:

Labels: friends, grandparents, life as a quadriplegic, looking back

When I was in college, I had a class on marketing. Part of the teaching was to consider the source, and funding, of information before fully relying on it. As example, a study funded by Dr. Scholls will likely not conclude that going barefoot is best for feet, but that everyone needs particular inserts or shoe type.

It is once again election season with final votes being cast in just two days. For the last few months, political advertising has been increasing on YouTube and social media. When I watch the evening news, almost all the commercials the past few days have been politically geared. These are times I especially remember to consider the source and look for what is not being told.

Main stream media tends to be very concentrated toward one political party. Therefore, I expect to see anything the other party does portrayed in a bad light even if it requires stretching the truth. With access to the internet available everywhere we go, it's very easy to check on what is being put forth as truth. Life experience can also be beneficial.

One commercial I have seen numerous times shows a C5 quadriplegic, Tucker, going through his morning routine while telling his story. In it, he says how his nursing agency dropped his care and forced him to move. This was a rough situation, as I perfectly understand, and then he goes on to say how bad the Iowa Medicaid system is.

The commercial implies he had to go to a facility, but I notice Tucker is rolling around in a house. Therefore, he is either at a very small place that uses homes or is back in his own home. Tucker also doesn't say why his agency dropped him. Was it due to lack of care providers (as I had once)? Did he no longer qualify for help? As a C5 injury, Tucker shows he has some arm control and breathes independently. I've known other quads with similar, or higher level injuries that don't qualify for much care due to not needing breathing assistance.

It is also possible Tucker was denied care for lack of funding. Whatever the case, the viewer is led to make assumptions and support a particular candidate. I do agree that Iowa's Medicaid system needs work. However, I've seen medical funding get messed up as a result of both party's actions. It's just another pawn that is used during campaigns.

I encourage everyone to vote, but also be well informed by researching candidates and their party. The choice can have major consequences for the quad life and every citizen.
Posted by trainman at 12:00 PM No comments: