There is saying that if you don't like the weather in Iowa, just wait a few minutes and it will change. I'm waiting, but I don't like the change that's predicted.

We were very fortunate the first weekend of 2019 with very warm temps. Since then, it has turned snowy and very cold. So far this month, six of my nursing shifts have been missed with all but one due to weather. This week doesn't look to have much snow, but extreme cold. I think I will be rescheduling a hair cut I'm supposed to have this week for a hopefully warmer day. 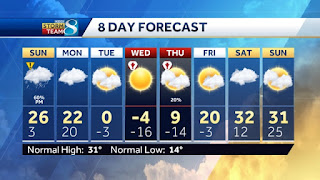 It's no secret I don't like cold weather and winter. I try to base my thinking according to the Bible and have concluded that winter, as we know it, is part of the curse of sin. I'll try to explain my reasoning for this thought.

When God finished creation week, He called everything very good. The crown of creation was mankind, made in God's image, man and woman. Part of their rules were to work and keep the garden of Eden. The first couple, and all animals, were to eat what the earth produced. Lastly, before the corruption of sin, Adam and Eve did not wear clothing.

This shows several things when we stop and think. In order to have food all year long for every creature on earth, plants would have needed to be growing and producing all year. That also allows for Adam and Eve to fulfill their job of working the soil. Finally, with going around naked, the first couple didn't need protection from the harsh elements of a cold winter.

On day four of creation week, God said the stars were set in place to mark seasons. Therefore, the four seasons would have been set in place from the beginning. However, based on the above thinking, it likely would have been much more mild, maybe something like southern Florida experiences.

Unfortunately, the first couple sinned against God and brought the curse on all creation. The flood during Noah's time would have drastically changed the earth's climate with an ice age to follow. As I look out my window at a snow covered landscape, it reminds of this history.

God still uses the world in it's current state to show His love. In Isaiah 7:18, and other passages, God promises our sin stained life will be made white as snow. I look forward to that time of after the quad life and the new creation,
Posted by trainman at 11:59 AM 1 comment:

I'm happy to report that my night hours are back to normal, mainly. Insurance denied increasing the daily limit for nursing services. However, state insurance is likely to approve an extension retro-actively to January 1. Therefore, my nursing agency is allowing regular hours to resume, as long as everything is approved.

It is great to be back to the normal routine, but it also makes me wonder. What is normal? For many people, breathing, walking, and moving independently is normal. Living the quad life, all of those activities would be very abnormal. Therefore, normal would be something an individual defines for her or himself for some circumstances. 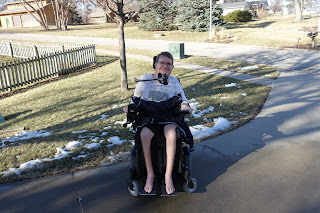 For me, wearing shorts outside in January in Iowa isn't normal. When conditions are just right, the regular routine can be adjusted. For others I know, this type of dress code is common all year long, no matter weather conditions. General society may think it's strange, but that also depends on the population.

In the U.S., it is normal to have things such as fast-food restaurants easily available and a common part of some family's meal plans. In other countries, they would be an extreme luxury and only found in select locations. Just within the United States, different regions have various accents and daily routines that are normal for that area, but not for others.

In order to define what is normal, it appears that you first look at the country a person is in, then what region, and finally for the individual. Therefore, I don't believe one universal definition can be applied to everyone. We need to look to an ultimate source for a standard.

As a Christian, my standard that I use is God, through His word. Looking at the moral law, the ten commandments, gives a foundation on how to live and what is good, or not. This year has shown already that everything in life can and will change, but the Bible is the only constant. Hopefully this week ahead will go according to my regular routine, but I know where to look if it goes astray.
Posted by trainman at 12:00 PM No comments:

When your life greatly depends on funding from medical insurance, it can get complicated. One phone call this week set off a chain of events that's still unfolding.

On Tuesday, the head of the nursing department I use for night coverage called. On July 1, 2018, my insurance provider increased the amount they paid per hour for nursing services. However, they also have a daily limit on what will be covered, and that was not increased. Therefore, the change meant that only 7.5 hours were covered instead of the nine I get every night.

I wasn't aware of this until the call. The agency had just been covering the extra 90 minutes during 2018, but were no longer willing to do so. Therefore, the company would be making the same amount on providing care, but by covering fewer hours. The fun doesn't end there though.

Medicaid allows one hour of nursing visits per day, five days a week. I don't use this benefit, so that would allow my night hours to return to 8.5 per night and the agency is willing to cover the final 30 minutes, making my usual nine hours covered five nights a week. That leaves two nights a week that would be short the regular time.

At the end of December, I received a letter from my insurance provider stating my nursing services would be covered January 1, 2019 through July 30, 2019 up to 10 hours a day for a certain amount. If changes were needed, then the agency should contact insurance for adjustments. After getting the letter scanned, I mailed it to the supervisor and pointed out the line about changes. His response was that he tried with another family and it didn't make any progress.

Wednesday, I called my insurance provider's case manager and let her know what was going on. I provided more details Thursday as I knew more and as of Friday, someone else is reviewing the changes needed and will hopefully get back to me early this week.

My parents and I chose Saturday and Sunday to be short on hours, so this has been the first weekend with decreased coverage. I'm thankful I have loving parents that are willing and able to do the extra work and go with changes. We are hopeful it's only temporary, but won't know for a while.

Living the quad life is rarely boring. I somewhat look forward to what may come this week, but I know God is in control whatever may come.
Posted by trainman at 11:59 AM 1 comment:

Labels: change, dealing with assistants, relying on God, relying on others, unexpected times

When you own something, it will need maintenance of some sort to keep functioning. That's especially true when it comes to medical equipment.

On Thursday, I had a hair cut scheduled late in the morning. About half an hour before the appointment, my caregiver starts working on getting me up in my chair and ready to go. Just as she went to pull it out of it's parking spot, I hear, "You're going to need to reschedule." She saw two wires that had their insulation rubbed off and one looked broken.

She tried testing my chin control to see if they worked and no response. I have had this chair for over three years now and haven't had any trouble with it, so I guess it was due to happen. Dad came home later in the afternoon and looked over the situation. He wasn't sure he could fix it at first, but kept working on it. Thankfully, some wire splicing, heat tape, and wire adjustments fixed the problem.

Dad said it looked like I hit something that almost completely severed the wires that go from my chin control to the computer that responds to my input. I don't remember hitting anything, let alone that badly, but evidence shows otherwise. Everything worked well on Friday, so I was able to decrease the mop on my head. However, the lift we use to get me in and out of bed sounded like the battery is going bad. That may be the next item to get worked on, but it hopefully won't leave me hanging.

The tools we use require upkeep, but it sometimes applies to our own life as well. For the past few months, I have neglected this myself. Regular readers of the quad life may have noticed a bit of depression and sadness in my writing. It is one thing to say you know God is in control of all things, but it is another to have full trust in it. I have been saying more than trusting.

This week, I have been especially reminding myself of this fact and am working toward getting back to my regular self. Becoming more isolated during winter doesn't help, but I'm looking forward more to what 2019 may bring, in any direction. As we go through this week, make sure to take care of yourself, such as diving deep into God's Word, as well as the little inconveniences that may come.
Posted by trainman at 12:00 PM No comments: