This weekend I watched the public debut of the movie "The Atheist Delusion" by Ray Comfort. He has made several Christian evangelism movies before and this is another one I highly recommend.

In this latest movie, Ray talks with with atheists at a college campus and reasons with them for the existence of God. Throughout the hour-long program, he works with several people and by the end many of them are no longer certain about their belief of God not existing.

Unfortunately, we keep seeing atheism on the rise and people not making God first in their lives. This is true both out and inside the church. In 2007 and 2008, my church averaged 198 people for morning service, now it's 181. The biggest difference is with evening service, going from 135 down to 64.

People are maybe willing to give God one hour of their Sunday, but not two. This is only one day a week, one set aside to worship and further learn God's Word. Unfortunately, we often put our own pleasures first before we are willing to serve our creator. Some countries have Christians meeting secretly for fear of being arrested, and we can't even get people to come when they can freely worship.

I've heard comments that Sunday is for family time, that evening service doesn't have the right kind of music, or just didn't feel like going. Isn't the family unit meant to teach about God and His requirements for living? What better place to do so than in church. If a particular music type is your reason for going, then you merely want to be entertained for an hour, not actually hear the Word.

If the Democratic nominee for president is elected, I'm afraid we'll being seeing further persecution of Christian values. Just like Kim Davis was arrested last year for standing up for her Christian morals, it likely will increase. I'm afraid America will have an awakening like hasn't been seen before, but too late.

God's will happens no matter what government persecution or Christian participation occurs. I pray that this portion of the quad life can stay free at least in my lifetime.
Posted by trainman at 3:39 PM No comments:

During my flat time, one of my activities is playing Farming Simulator 15. The primary function is to prepare a field for planting, plant the crop, harvest, and repeat for infinity. Adding in livestock or different crops increases the activity, but it's still basically a series of repetition. Somehow though, I still enjoy it.

Next week, an updated version is being released, Farm Sim 17. Yes, 17 is being released in 2016, but programmers don't pay much attention to calendars. I've been watching as information is released and reading reviews from various sources. One reviewer started his commentary by saying he has over 600 hours playing the current version of the game and is an expert. I was mildly impressed, until I looked at my own numbers.

In the two years since starting the game, I have played on four different farms. With these four combined, I have accumulated over 800 hours. Half of that is from just one map alone. Thinking further, that is over an hour of game time per day. I'm also thinking the time has been increasing more rapidly in the past six months or so than the previous 18. Averaging over an hour a day for a game is okay, but where else is time better spent?

I don't have an automatically recorded time for anything else I do, so it's just estimating from observation. Reading Scripture twice a day takes anywhere from 30-60 minutes depending on chapter length. I try to read during some of my down time, but it only ends up being a couple hours per week. The remainder of the day is taken in sleep (or attempting), every day needs, and various activities such as work and chatting.

Looking at how I spend time in the quad life isn't anything new. I'll see what God has planned for the time He has given me this coming week.
Posted by trainman at 9:30 AM 2 comments:

This past spring I had the urge to try growing herbs in pots on the deck. I have done it before with mild success and it was fun. Therefore, I tried it again this year.

My mom found a bag online meant for use as a pot, and one in particular was deep enough to use for that purpose. So, I gave it a try instead of leftover flower pots from the basement. I planted, dill weed, sage, parsley, and chives. 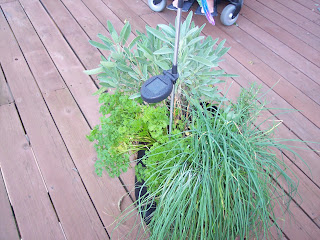 Everything grew quite well and it was nice to be able to use fresh ingredients in our family meals. We mainly just used the chives and dill weed, but everything grew to good size. Unfortunately, I'm still learning what to do.

After cutting off part of the stalk for dill, my caregiver said it's best to just get the spice instead as cutting kills the plant. Sure enough, the one my family uses the most died off prematurely, but it was great while it lasting.

The fragrance after retrieving an item from the deck was very strong as well. If I wasn't hungry before, I was after smelling the aroma.

Unfortunately, I live in Iowa and colder temps have arrived. The remaining plants started to whither a few weeks ago and it was time to put away my green mouth stick. I think next year will see the grow bag in use again. Next time will be more items that I use and trying to keep everything growing all summer.

No matter the outcome, it was a good opportunity to get outside more and witness one of God's creations of simply growing plants. It's yet another reminder of how we depend on His creation to sustain us, even if just for flavoring the quad life lunch.
Posted by trainman at 6:36 PM 3 comments:

It's that time once again where we vote for the next commander of the country. Four years ago I thought we had bad options, but I didn't imagine it would get worse.

I've read several commentaries that the nation is in a very poor state to even have Donald Trump and Hillary Clinton as our main two choices for the office. I've always said I vote for the least of the evils, but it's getting to be a harder decision on which is the least.

One option would completely throw out the bit of remaining Christian influence remaining in this country. Having abortion allowed at any point of pregnancy, and continuing to expand the LGBTQ agenda.

The other option is a man who regularly changes his mind and has had several bankruptcies in his past. He also wants to end the Affordable Care Act, which I somewhat agree with, but doesn't say what to replace it with. Taking over a country that is already very far in debt and needs extreme help isn't an easy task.

If you state you are for one side or the other, be prepared to get cursed at from the other side. I've seen it on social media and local news has had several instances of political signs being taken out of yards, shredded, and destroyed. Not only are we a country choosing questionable leaders, we can't act civil to each other.

Last week, I read a piece by Dr. Daniel Howell that I can say aligns with my thoughts pretty well. Neither choice is easy, but which one would be the worst?

No matter what happens next month, I'm consoled by remembering God is in control at all times. Israel and Judah had many bad leaders before destroyed, so I'm hoping we have a few to go yet. The quad life will continue as God planned, whatever the country around me dissolves into.
Posted by trainman at 3:45 PM No comments: