Looking Back and Ahead

Today we officially say farewell to 2017 and welcome in 2018. For me, this year has been one of unique experiences and new possibilities.

In May I helped with a new outreach booth had opportunity to work with more people. I have heard some talk about it coming again in 2018 and hope to be able to volunteer again. I had planned on a few days at the Iowa State Fair this year as well, but van trouble limited it to one.

March had a new speaking opportunity with RT students. After talking with the organizer at the outreach booth in May, I worked on getting my license to exhort. Testing was successful and I preached my first sermon in November. When spring comes, I hope to speak at more churches, but 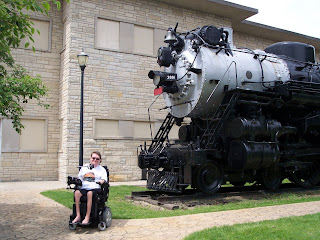 time will tell what is in God's plan.

Along with speaking, I was able to volunteer another year at camp and work with the campers. I look forward to volunteering with the kids, but the drive out continues to be challenging. I also don't like taking away a week of dad's vacation and am unsure if camp will happen for me in the new year.

After a five-year break, this year saw my first return to the hospital as well. This is something I pray does not repeat in the coming year, but as with everything I can only do as God has in my plan.

Throughout the year I was also able to have time with friends and family. I got to spend almost every night with those closest to me and have a visit from one. I'm thankful this year my family didn't have any major health problems and I pray that 2018 will continue in this trend.

I don't know what to expect in the coming weeks and months for the quad life, but I can see the blessings I've been given these past 12 months. I was able to get one entry here every week and hope to continue for my few regular readers.

Have a blessed year everyone and be sure to take time to look back and see all that has been done!
Posted by trainman at 11:51 AM No comments:

Normally every day, I read Scripture in the morning through an online plan that takes you through the Bible in a year. At night, I read my physical Bible as well at a pace similar to the morning reading plan. Therefore, I typically read the Bible from front to back twice a year.

This past Tuesday, my night reading finished the end of Revelation and I was able to move my marker back to Genesis to begin again. I'm not certain how many times I have gone from cover to cover in my life, but I'm guessing it's between 25-30. In these readings, I come to agree with other commentators that the Bible talks about one person, Jesus.

Starting at the beginning in Genesis, God promised that someone would crush the head of the serpent. So already in Genesis 3, we see a foreshadow of the coming Savior. A few chapters later in Genesis 6-9 in Noah's flood. All the people of that time died in the waters, except those who went through the door of the ark. In John 10 Jesus said "I am the door..." Today, those who don't go through the door of Jesus will also perish.

Today we celebrate the birth of that Savior. The kings of kings and Lord of lords, the creator of heaven and earth who came as a baby. The one that spoke creation into existence and commanded angels could only utter a cry for His needs.

Modern Christmas celebrations in the U.S. often do everything to take Christ out of the picture. He is the real reason to celebrate, not the best bargains or gift you receive. The true gift is free, and available to all who repent of their sins and fully trust in Jesus Christ.

I wish my readers a very Merry Christmas and encourage getting in to reading the Bible for this coming year and looking for the one story throughout.
Posted by trainman at 6:51 AM No comments:

Watching the news and having some awareness of international news is something I think is important for everyone. However, it can be very depressing at times and especially as a Christian, makes me see how bad the world is getting.

Recently, Iceland has declared that they have eliminated Down syndrome in their country. In order to achieve this goal, any pregnancy that tests show to have this syndrome are automatically aborted. Reasoning is given that this children would not have a good quality of life and should therefore be killed prior to birth.

In October, Frank Stephens, a man with Down syndrome, addressed the U.S. House Appropriations Subcommittee. During his presentation, Stephens told how he has a good and active life and is very much worth living. He then went on to address the trend in some areas of curing disease by killing the patient. I highly recommend listening to his entire presentation, Stephens makes good points on a serious topic and still gets a few laughs.


As I have gone to schools, colleges, and just out in public, I find that a lot of people just aren't familiar with disabilities. Most just haven't had any exposure and therefore are unaware, but others don't care either. When a government entity comes along and says this population struggles with life and abortion is the "kind" option, they blindly follow along. Somehow that sounds very similar to Germany in the 1940's.

By this same reasoning, I could easily see the practice expanded to other types of disabilities, such as those of us living the quad life. We often can't breathe on our own, require assistance for absolutely everything, and some live in care facilities or just stay home most of the time. It sounds harsh, but I don't think it's long before countries like Ireland make this line of argument as well.

No matter what a person's abilities, we must remember that ALL life is precious in God's eyes and we are the pinnacle of His creation. Life is so sacred that He sent His son to die for our sins and was raised to life again so that we may have eternal life with Him. As we start the last week before Christmas, remember this is the reason we celebrate and to cherish every life He has put on this earth.
Posted by trainman at 12:12 PM No comments:

It hasn't been completely back to normal this week, but it gets closer every day. I had dentist, hair cut, and biking in Des Moines once again. Everything went well, except for some news from the dentist.

First, I had a a new dental hygienist to break in. I normally stay in my chair for appointments, so he was having a challenge finding the best angle to get to me and see everything. At one point, the suction device ended up on my eye and I was thankful I had them closed. He did say my teeth looked a little worn for my age which resulted in explaining how I use my mouth stick to type and do anything.

After the hygienist finished, my dentist poked around and didn't like the feel of one of my teeth. It's the same tooth he did a root canal on a couple years ago and he was curious if problems were happening again. This meant going back to the new guy and figuring out how to x-rays. Since he's new to my dentist, the hygienist also doesn't have his own room. Therefore, we ended up putting the x-ray machine in the hall for my picture while another patient was getting worked on a few feet away.

The image showed the tooth is having absorption just below the jaw line, or basically eating itself. My previous root canal was done to stop the same process, but it didn't last very long. In further discussion, my dentist said the only solution is to pull the tooth. It's in the front right of my mouth, so his suggestion is to then get an implant so I can continue to use my stick and drive my chair as I do now. However, the entire process takes about six months.

Of course it's also considered cosmetic, so my insurance likely won't cover it. Ever since the diagnosis, I've been paying closer attention of how I hold my stick in relation to the tooth. For now, we're not doing anything, but he said at some point it will likely break off if not taken care of soon.

I'm thankful I have access to good dental care and a solution is possible. I know when I was a kid I managed my mouth stick through losing baby teeth and waiting for the new one to return. Whatever God has in store for this quad life, I will be carried through.
Posted by trainman at 11:27 AM No comments:

Anyone with high spinal cord injuries has a condition called autonomic dysreflexia, or AD for short. Whenever something is going on in the body, such as needing to use the bathroom, the person's blood pressure will go up. In my case, it happens for something as simple as passing gas and will cause my blood pressure to go up or down for a few minutes. It's very common and those who know me hardly notice it.

While in the hospital last week, it was part of their routine to take my blood pressure (BP) every four hours. On Monday, the nurses noticed my I.V. wasn't working anymore, so it was removed. They couldn't find another place to put one, so we chose to leave it out as I wasn't using it much anyway. Early that evening, it was time to take my BP, except it happened to be while I was having minor AD. My pressure came back low, at about 78/50. This is a little down from my usual, but not a lot. However, it's apparently very low for most people.

Within about two minutes, I had at least five nurses in my room all wondering what to do and retaking my BP via different methods. I tried saying this wasn't unusual and shouldn't be a concern, but my comments didn't get anywhere. My parents were also visiting at the time and tried to say the same. The nurses concluded I needed to quickly get some fluids by I.V. to help bring everything up, but I no longer had one. Therefore, I ended up having one placed via a type of ultrasound and getting the needle in a larger vein.

After the fluids, everything was good again, and was long before due to no longer in AD. I'm very glad the nurses were responsive and worked to solve the problem. I almost find it comical though that a dangerously high BP received no response a few days earlier and a not very unusual result had a large response.

On Tuesday, my doctor wanted to keep me a little longer in order to monitor everything further. Thankfully, she was willing to listen and I was able to help teach her about normal responses with SCI. The explanation satisfied her enough that I was released a few hours earlier than originally planned.

Since returning home, I have been very tired when doing much of any activity. Thankfully, yesterday I was finally feeling back to normal and have been today as well. Like it or not, I've been living the quad life for over three decades and I should expect longer recovery times for these situations. I'm thankful for God's continued care through so many people and look forward to a regular week again.
Posted by trainman at 10:53 AM No comments: