While my parents were gone last week, my best friend, John, came for a few days with his son TJ. They came last September as well and it was good to see how TJ has grown. While sitting here chatting on Wednesday afternoon, we talked about some upgrades John had done for his dad's computer. After a little more discussion, we thought my 5.5 year old machine could do the same.

Of course, we didn't have the parts or tools we needed to do the job. However, that was fixed by an online purchase and overnight shipping. Less than a day after contemplating the task, the tools were in hand and ready to begin. 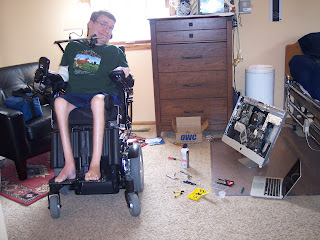 After lunch, TJ took a well timed nap and John started to take everything apart to add a new hard drive. He and I remembered our high school years of adding new, or fixed, components to my computer. Mom would come home from work and find what looked like an explosion in an electronics store, and two grinning teens. John considered waiting until they returned so we could get the same reaction, but figured pictures would work.

About two hours after starting, and a trip to the hardware store, the new drive was added to my machine and all parts put back in place. The next step was getting the software loaded again and everything working with the new drive. This part of the job started at about 5:00 in the afternoon.

By 2:30 in the morning, we had tried a few attempts unsuccessfully to get everything loaded. At that point, we went with the easy solution. It thankfully worked, and another nine hours later while I was at a doctor's appointment, everything completed and the upgrade was a success. I don't notice a big change in most tasks, but it generally runs much better.

The best part was spending time with John again and catching up on the last few months and future plans. It will most likely be a couple years before he can come again, but it was a great time in the quad life. I'm thankful for these times and look forward to what may come.
Posted by trainman at 1:17 PM No comments:

Labels: computers, friends, looking back, relying on others

Trees are showing early leaves and flowers are blooming. It's a beautiful time of year in Iowa with warm temps and bright sunny days. I've enjoyed spending time outside these past few days enjoying the change, along with some pink skin to show for it. 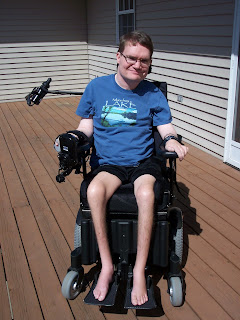 This is my first spring without my trach and associated trach ties. Feeling the sun on my neck is a new experience and it feels very good. It's almost like a warm hug around my neck, instead of ties. I'm looking forward to more time in the sun as weather allows.

My parents left last week on vacation and don't get back until the end of this week. Therefore, I have the house to myself for nearly two weeks. That means I'm responsible for covering all my own meals, and getting groceries. So far, I have tried four new recipes and they are all keepers in my opinion.

Of course, we sometimes find an ingredient in a recipe that isn't on hand and need to make a substitution. Using a different kind of cracker for breading on a chicken breast isn't a big change though. The staff at the grocery store are starting to recognize me as well.

I stopped in for a few things before my parents left and then again last week. For some reason, my family doesn't own a cow, so things like milk don't last for more than several days. Rolling up to the meat counter, a man packaging meat gives me a look and says in a friendly tone, "Back again huh?" For some reason, he apparently remembered me.

It's too rare that my parents get to go on extended trips. We all enjoy breaks and I like being the man of the house again. For just a brief time, I get to remember what it was like the three years I lived on my own in college. Small perks in the quad life make me more thankful for all the gifts God has given me and to be appreciative when they come.
Posted by trainman at 3:40 PM No comments:

Labels: barefooting, dealing with assistants, life as a quadriplegic, relying on God

Work has been pretty slow this year and I learned last week I am losing two more clients. Neither one were very busy, but they were some work in any case. With warm temps and nice days almost upon us, my mind has been contemplating things to keep busy.

I really can't do anything that would require extra sitting, so that eliminates long-term volunteering with anything. With only being upright for 5-6 hours a day, it also limits what I can commit to for activities. Keeping these in mind, I have been praying and brain storming for ideas.

Ideas so far have been getting back into more writing. I did the school newspaper for two years in high school and worked for a local newspaper for a year as well. A few years ago, I also wrote an article for my church denomination's disability newsletter that received several good comments. It's likely that it wouldn't go out anywhere, but it's a possibility.

For the next several months, a slow schedule will allow for easier troops to Des Moines for riding bike and possibly a few Saturday train watching trips. With my new chair, I need to remake parts of the video I use when I speak at classes. I think having one specifically made for that purpose will be helpful in explaining life with a disability. Maybe I could get real ambitious and make a video that can be viewed independent of my presentation and go to more schools than I can visit.

Whatever God has in plan for me, it definitely feels like I'm beginning a transition of some sort. I can't imagine getting completely out of web development, but I may just not be seeing God's plan. As I tell school kids, the quad life can do a variety of jobs. Probably not making pizzas or selling food door to door as some suggest, but not only one career choice.

This week is already shaping up to be an interesting one. Next week's post will see how it continues through the next few days.
Posted by trainman at 7:13 PM No comments:

Labels: helping others, life as a quadriplegic, work

It's never fun being sick, and that has been made clear once again these past few days.

I was diagnosed with a mild infection last Friday and started taking an antibiotic. Friday night, I had an extremely congested nose and was having a very hard time breathing. My pacemaker gave it's pulse every four seconds as usual, but I could barely pull in air through my nose. Breathing my mouth helped some, but it quickly dried me out and was also difficult.

The nursing agency was also unable to cover the shift, so it meant dad was up with me. He has been having trouble of his own that it's painful to move, so I didn't like to bother him. The only relief I found was to trigger a muscle spasm so I would take a deeper breath. Of course my muscles were quite lose, so they didn't come very easily.

Fortunately, it cleared up some and I was able to get a little sleep. If it was easier to connect to the vent with the trach button, I would have taken the option. I tried my usual tricks for clearing everything up, but they didn't help.

Saturday during the day still had major congestion and the night was a near repeat of Friday. Sunday and Monday thankfully started to have some relief, but breathing was still a challenge at times. Laying on my side was the hardest position and I have spent more time on my back than I should these few days.

Today has had a few difficult times and exhaustion, but not nearly as bad as it was over the weekend. I have an appointment with my doctor tomorrow, but will likely cancel if tonight goes well.

We take things like breathing easily for granted when we're used to it. Even in the quad life when it depends on a machine. Thankfully God has given us bodies with ability to heal, and we can be thankful when health returns.
Posted by trainman at 7:45 PM No comments: