From what I have seen on the news, the flu has been very wide spread this year. Iowa has been hit hard as well with schools low on attendance and hospitals busy. Mom had a doctor's visit due to paperwork for me, and the bug entered our house.

She has been having trouble with coughing and tiredness for over a week now. A few days later, dad also started having trouble with a cough, chills, and not feeling well. He has not had it as bad as mom at least and is getting towards recovery. Thankfully, as I write this, I have stayed healthy without any problems. However, that gets to be a challenge in the quad life.

First, I wish that I could help them more. For five hours every evening, and weekend days, I don't have a caregiver. So instead of resting and not doing much, they need to help me. I try to do the absolute minimum I can to both allow rest and limit my exposure. However, I'd much prefer helping prepare and serve chicken noodle soup for them instead of the other way around. Unfortunately, that's not the life we've been given and I look more to God for His direction.

When the flu season is around, it makes me wonder about how best to stay well. I think there is a thin line between somewhat healthy germ exposure and completely living in a bubble. Yes, when someone is sick with something contagious they need to take precautions not to purposefully infect those around them. However, if you are never exposed to anything, the body's immune system doesn't build up antibodies to react when germs come.

Maybe in some ways I'm more in the direction of little exposure to germs. A common warning is to wash hands frequently in flu season. My hands mainly make for good decoration at the end of my arms and never touch anything, so limiting exposure. I also don't go out much this time of year, which also helps.

For all those struggling with any type of illness, I pray for fast and complete recovery. It's a reminder that our once perfect world is no longer what it was and makes me look forward to what is to come.
Posted by trainman at 11:33 AM No comments:

One of my Christmas gifts was an Echo Dot from Amazon. It isn't something I had on my list, but a novelty item my parents thought sounded interesting. When I first saw it, my thought was, "That's neat, but what do I do with it?" I have been learning the last few weeks and it's starting to grow on me.

Without the use of my hands, most people would think voice activation and I are very good friends. It is true for some living the quad life, but not me. I last tried voice recognition software when I started college and was glad it didn't record my thoughts. Unfortunately, it barely registered my voice either and I found typing to be much easier and faster. It is now nearing two decades later and I still haven't changed.

Every month, I use an automated system to report my income to social security. Most of the process works fine until I have to say and spell my last name. My diaphragm pacemaker makes me take a breath every four seconds, whether I want to or not. I can't say and spell my last name in four seconds and make it clear. The automated machine usually works through my pause for breathing, but we have had words other than my name before.

So now I have this little tuna can size box that only works by voice. To activate it, you simply say the word Alexa, and then have it do something. Ever since setting it up, I get a few emails per week on learning Alexa skills. I'm slowly learning, but I'm generally liking it so far.

When I get up and go through my morning routine, I tell Alexa good morning and she responds with some trivia about the day. I have used it a fair amount to remind me of various things I need to do as well, but what I say and what it repeats are not always the same. If nothing else, it saves on sticky notes at least. Playing music is another one of its features, but my Amazon music library consists of only a few songs. If it will connect to iTunes someday, then I'll be all set.

Friday was national popcorn day, according to Alexa, and I posted as such on Facebook. It started a conversation with another quad friend that has several Echos and is automating his entire home. I don't see me going that far for quite a while, but the possibility is intriguing.

This week looks to be another calm one. I'll see what trivia my tuna can gives me keep learning as we're given more technology to help in this world.
Posted by trainman at 11:32 AM No comments:

Every day, I use a number of supplies for various functions. It's generally a set number of items that I can track how much I need to have on hand. Every month I order what is needed and have it delivered to my house. Most months are pretty similar to each other, but with some variation. This has been one of my regular activities since high school.

Even with the routine, my medical equipment (as insurance classifies supplies) provider regularly makes mistakes. Errors can be an incorrect quantity sent, incorrect billing to insurance, or a combination. Through the years I have become very familiar with having to call and get corrections made for my orders. Unfortunately, it seems to be a trend with more providers.

In October, I was finally able to order my own F.E.S. bike from Restorative Therapies like I've been using in Des Moines for the past two years. It finally arrived in mid-December as an early Christmas present. A technician came a few days later to set everything up. As he was working, I noticed something was missing, the correct pedals. 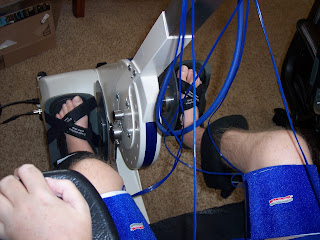 I have small feet, and the regular bike pedals I have been using are about twice the size I need. When I talked with my sales representative in spring 2017, she said pediatric pedals were included with all new machines and they would fit me better. That is what was missing from my new bike, only the regular large option was included.

My setup technician put in a request to contact me about switching them out, but I didn't hear anything after a week had passed. So once again, I called about getting the correction made. However, I now had a different sales person than I talked with last spring and her answer was that they were available, for a large price.

Fortunately, after they were reminded of what I was told and supervisors had been consulted, the small pedals were on their way. They arrived just before the year ended and were promptly swapped out with the original large version. Now I can bike at home without my feet turning sideways. As of today, I've averaged over three rides a week and have been noticing calmer legs more often.

I'm very thankful that technology exists in various forms to help me function through the quad life. Keeping everything straight can be frustrating, but also glad when it works. I look forward to many more miles ahead and thankful for God's provision.
Posted by trainman at 12:00 PM 3 comments:

Labels: barefooting, learning, life as a quadriplegic, living in a society, relying on others

Around the world are different traditions during New Year's Eve and day. In the U.S., many like to watch the ball drop in New York, be it in person or watching on TV. According to Google, Australians often take boat cruises and also watch countdowns in cities. Some people have certain activities they always do while others just party the night away.

My family often has a small party on New Year's Eve. We used to all stay up until midnight and watch the clock change, but we haven't in a few years now. Living with those in the sixth decade of life means we're usually wrapping up around 10:00, but I must admit that I'm not much for staying up late either.

This year, I did not have a night nurse on the eve of 2018. Therefore, my mom and I were up at midnight to watch the clock switch, but we both would have rather been near sleep. I did have a tradition I followed for a few years, and one that was unique to the quad life.

When I used the traditional ventilator, I liked occasionally getting off it for a few minutes at a time and practice my breathing. It was a nice break from the noise and the mechanical breathing pattern of one breath every four seconds, or 15 breaths per minute. Every other week my tracheostomy (trach) tube was also changed. I have full feeling of the area around my trach and my throat, so it also felt good to be free of it for a short time.

I made it a tradition that we did my trach change when the year renewed. My nurse would remove the tube just before the stroke of midnight and replace it after the hour change. I could therefore say I ended the year without having the hardware and started the year without it as well. Granted, it was less than a minute most years, but it was still a unique way to start the year.

In 2015 I replaced my full tracheostomy with a trach button. Also with different caregivers, I wasn't changing it at night anymore. Therefore, like many traditions, it is now just a memory.

With the first week of 2018 now complete, I have already started new routines of biking multiple times a week and continue daily reading. I will see what God has planned for the upcoming weeks and months.
Posted by trainman at 12:00 PM No comments: