September was spinal cord injury (SCI) awareness month. I followed the example of a friend and posted something about SCI every day on my Facebook page. It has been a fun and rewarding exercise. 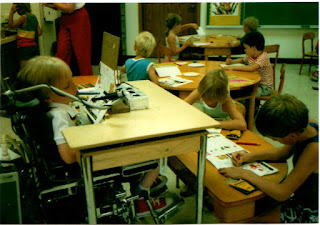 I tried to limit myself to three paragraphs of information and start out with general information before talking about my own experience. With writing here every week, I'm used to having more space, but I was able to stay in my self-imposed rules. It helped that I made a list of 30 points in August so I didn't have to think of a topic. I knew what was coming next, could allude to it, and somewhat plan what to write in my head.

A few people said they enjoyed the updates and learned a few pointers. Some days received a lot of feedback with others hardly getting any interaction. If I had several days in a row with little interaction, it started getting frustrating, but I somewhat expected it for certain topics. 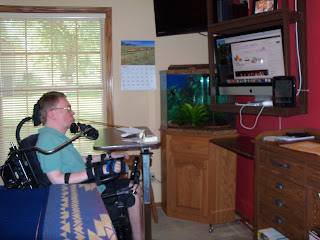 In the over 34 years I have lived with my injury, I have seen a lot of change. Technology has greatly improved for therapy, independence, and the ability to connect with other families. Having a certain month designated to raise awareness of it also helps, but I can't say I heard any mention in regular news channels.

With tomorrow's conclusion, it will be nice not trying to remember to do an update. However, it has felt good to more actively teach about the life I've been given and have more interaction with friends, even though it's just virtual.

During all this, I had eight shifts missed in September, only four were scheduled. I had to cancel two meetings I was scheduled to attend and had more trouble with my pressure areas. These are normal parts of the quad life, but I only barely mentioned them.

October will be another challenging month with nine shifts already scheduled to be open. Winter weather and illness looks early this year, so that number could raise. I'm increasingly thankful for the coverage God has provided through all these years and keep praying relief will come soon.
Posted by trainman at 12:00 PM

Labels: helping others, life as a quadriplegic, looking back, relying on God