With my calendar completely empty of any activities, I have had plenty of time around the house. My caregivers have also thankfully been healthy and able to come. Therefore, I have been getting plenty of time to go biking.


I have primarily been three times a week for the last few months and have seen some good results. My legs are regularly doing at least 20 seconds on their own and have had a few times of well over a minute. When I started biking in summer 2015, they were used to being completely lazy and not do anything on their own. They're still lazy, but just not quite as bad as they used to be.

Every Monday, I receive an email summarizing my previous week's sessions and a total of what I have done since starting nearly five years ago. Since March, I have been watching the total miles get closer and closer to 1,000 and estimating when I would reach it. I thought I calculated correctly, but one session didn't record correctly due to internet trouble. So my official report read only 998 miles biked.

Finally, just before Easter, I broke the 1k threshold. There weren't any fireworks or horn blasts, just an extra digit added to my total mileage. However, for legs that haven't moved under any sort of control for 35 years, I think it's a great milestone to reach. 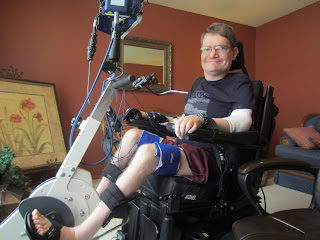 For equivalent, I could have pedaled from my home to Grand Rapids, MI, and back, and have miles to spare. Other destinations could be the Ozarks in Missouri or train watching in North Platte, NE. Just going one way, I could have gone to Houston, TX, Grand Junction, CO, or Washington, D.C.

In the quad life, it is rare to have my limbs actually do something constructive and not just hit and kick those trying to help me. I'm very thankful God has allowed us to make such technology and that He blessed me with the opportunity to use it.

Another week has passed with three more 3.58 mile segments in the charts. I don't know when, or if, I will get to double this achievement, but I am grateful I have been enabled to go this far.
Posted by trainman at 11:59 AM