For the last few days, I have been wondering what to blog about this week. I biked three times, got a hair cut, and made another video for my vlog. However, nothing seemed very notable or out of the ordinary, until Saturday. I watched another conference through the organization of Living Waters called Evolution Exposed.

Over the afternoon, several speakers gave 15-minute long presentations covering different aspects of evolution and creation. One of the presenters, Mark Spence, was sitting in his car, parked at Huntington Beach, California. A small memorial was taking place for a surfer who recently died and that was being followed by a rally for Black Lives Matter. After his session, Mark planned to go out with others giving gospel tracts and talking with people. 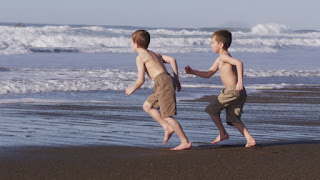 As the session went, he took the subject of why any life matters. It doesn't matter what shade of skin someone has, what sins they struggle with, age, or any other category. Mankind is made in the image of God, and therefore all have God-given value and needs to be respected.

From the evolutionary standpoint, life is just an accident and isn't anything special. A person doesn't have any more value than a dog as the two just developed differently. In Darwin's book, The Descent of Man, he said that different races existed on earth. His thought was that as mankind developed from primates, some are more evolved than others. The most modern, and civilized race was represented by the caucasians of Europe and America. The lower races, such as Australians and African tribes, were less advanced and further down the evolutionary tree.

Many publications, such as Little House on the Prairie, have been removed from schools and libraries for being to racist. However, the teachings of Darwin still continue to be heard in classrooms throughout the country.
The only answer to the problems we now experience is to return to God and His word. I'm thankful for the freedom to study Scripture and apply it to this quad life. I hope to help others in the coming week to see the source of truth as well.
Posted by trainman at 10:00 AM