With this last week in the 70's, it feels like late summer instead of fall. However, the calendar does say November and I have been getting my final doctor's appointments finished for the year. I've had two the last couple weeks and have one to go. 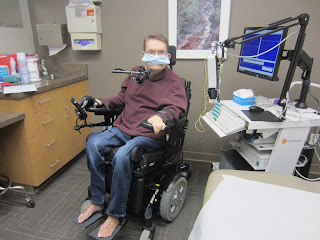 At most appointments, I'm greeted with questions on my health, have my temperature taken, and attempt to wear a mask. At one office, an older gentleman went in ahead of me. He was directed over to a cell phone sized device on a stand. It took his temp without any outside action by anyone I observed.

Electronics can make many parts of life much easier. I utilize technology every day and receive a breath every four seconds due to advances in medical technology. Having automated and hands-free options expands uses of these devices and allows for many applications in different roles. Who has control of these resources can use them for good, or bad.

As I posted last week, I suspected election results would not go easy. I watched poll numbers come in and then mysteriously stop as President Trump took the lead. As I write this, the winner has not been announced and the looks of extreme fraud are increasing. A fair election where all valid, legal, votes are counted no longer looks possible.

With workers getting harder to find and different economic plans, I see an increase in automation. I do not think robots will replace nurses though, at least not in my lifetime. In places such as manufacturing, it has already happened with robotic arms doing welding and other jobs that used to be filled by human operators.

If administration changes in Washington and the proposed tax and business regulation changes occur, more automation will be needed. If a business can't afford workers, and stays in the country, it's the only solution. The question will be, when is too much given to computer control? Are we possibly already there?

Electronic world or not, God is ultimately in control. This country will drastically change in coming years depending on election results, but I look forward to a new heaven and earth where righteousness dwells.

Labels: barefooting, living in a society, relying on God