For about the last ten days, I've been reading the book of Exodus in my daily Bible plan. After the Israelites left Egypt, they camped at Mount Sinai. God set boundaries around Mount Sinai and told Moses to prepare the people for God to speak with them. At the appointed day, the mountain was ablaze with fire, smoke, and a trumpet that continued to get louder. 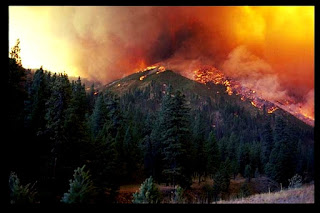 Terrified, the Israelites decided to have Moses tell them what God said, and they would obey. Through much of Exodus 19-32, Moses is then given the rules the people are to live by as God's holy people. We are told this time period was 40 days and nights.

While Moses was gone, his brother Aaron, the priest, was the temporary leader of the people. In Exodus 32, they requested a god to be made for them to worship, as they didn't know what had happened to Moses. In not much more than a month's time, they had gone from being terrified to even have the Lord speak to them, to breaking His first two commands to have no other god, or idol, in place of Him.

Today, we can look back at Israel and wonder how they could so quickly abandon what they had been told. It was also very likely that the mountain they were camping by was still covered by fire as Moses met with God. However, we are not any better than this nation.

Christians in the U.S., and I'm sure everywhere, often neglect the ten commandments and just make Christianity into something for self improvement. We forget, or ignore, God's judgement and only want to get our own desires. However, that is not the reason to come to God with a humble heart. We deserve eternal punishment for our sins, but Jesus came to be our substitution. He also said we will have trouble in this world.

When trouble or uncertainty comes, let us remember the true God of the Bible and not go seeking our own desires and. make up a god in our image.

Labels: Bible reading, helping others, living in a society