For nearly two years, I have had trouble at night with my nose getting clogged and having a hard time breathing. My Ear Nose and Throat doctor (ENT) said it would take extensive surgery to correct the problem. Therefore, I have been using nose strips and just trying to deal with it. Unfortunately, I started getting allergic reactions to the strips' adhesive and had to stop using it.

My long-time ENT also left his practice and went on to do volunteer work in other countries. When I met my new doctor, I talked with him about the problem and he said it was a simple procedure done in the office. Since I can actually feel my nose, I hesitated about getting work done, but was tired of not sleeping at night. Therefore, I made an appointment for the last Monday in November. 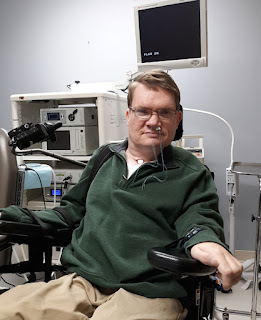 Dad took me to Des Moines and after getting to the procedure room, two bad tasting and smelling liquids were squirted up my nose to numb it. Sponges were also shoved in to provide further numbing and I was left to sit and wait. As the liquids did their job, I increasingly lost feeling from my sinuses on down my throat. I then remembered I had yet to take my noon medications and quick tried to before I couldn't swallow. The attempt resulted in a lot of choking and wondering what I was doing to myself, but it worked.

One final shot, via needle inside my nose, was given for full numbing before the procedure began. As this liquid reached my stomach, my chest started quivering and shaking as the doctor said, "Ready?" I had him wait until the pulsating stopped, but then he put various instruments up my nostrils explaining as he went. At one point, as he warned, I heard the cartilage in my nose popping as he applied pressure. However, it was finally finished.

Tomorrow will be two weeks since I had this done and my breathing is almost worse than before. For several days last week, I was very stuffy and needed suctioning several times a day. My throat was also sore from the irritation and I had trouble talking. It has thankfully improved, but I'm still wondering if I made the right choice.

The doctor said it will take a few weeks for swelling to decrease and notice improvement. I hope he's right. Just when I think I've experienced everything in the quad life, something new comes up. I look forward to easier breathing at night eventually, but hope I don't need to wait until Christmas.