In 2004, I rebuilt the website for my local Christian grade school and saw that the second-grade class did a course on disability awareness. Talking with the guidance counselor, I learned the course was watching a 30-minute video by Joni Erickson Tada. I volunteered to be a live version of the video and my school visits have continued every year since. 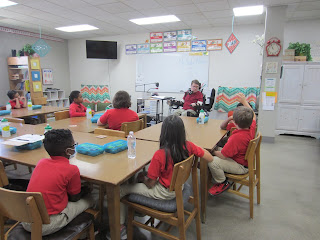 I currently have six grade schools I normally visit, with two of them having two grades combined. Therefore, I go to them alternating years and end up seeing five schools every year. For the last three weeks, I have spoken at four schools to seven different classrooms. One class was a third grade with the others all second grade.

With some of the COVID restrictions still in place, I wasn't sure how this year would work. When I scheduled visit dates in January, the teachers weren't certain about restrictions either, but school administers allowed me to come. My first visit was in a regular size classroom, but two classes of students all crowded into the room to hear me speak. I estimated about 40 kids were present with most of them sitting on the floor. I was frequently looking down toward my feet to make sure I didn't get too close to anyone as I moved around. A week later, I met with a class of 13 students in the school's gymnasium to allow further distancing. 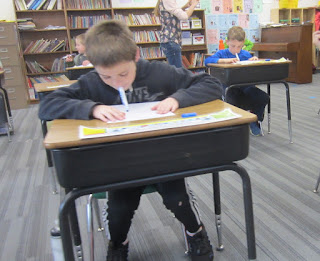 Every school I have visited, I demonstrate writing with my mouth and then have the kids try the same. Hearing about mask requirements, I planned an alternate demonstration this year. One of the videos I have the teachers play is about a boy, and his mom, who was born without arms. He therefore does everything with his feet, including writing in school. I thought I could have the students try this instead of mouth writing, but it wasn't needed. I saw over 100 kids the last few weeks and maybe 5-6 of them were wearing masks. I was thankful I didn't need to learn to adapt and could see the children's faces to get feedback as I spoke.

Most of the questions asked were the same as other years, but not entirely. Two students at different schools both wondered how I deal with challenging times or if anything scares me. I might be speaking to seven- and eight-year-olds, but it seems apparent this era of lockdowns is scary to them as well. Presenting at Christian schools, I'm thankful I could point them to looking to God's Word for assurance and trusting Him in whatever may come.

After these school talks, I've felt a new sense of energy again. One school remains, but I don't visit until late May. I'm thankful God has allowed me to share the quad life I've been given and teach the next generation to use any abilities we have, even if a little different from others, to serve Him.