Tuesday morning was my final grade school visit for the year. The students were four days away from being done for the year. As usual, I arrived during recess to an empty room and had time to look around a bit. The day's schedule had me in the morning and a class party in the afternoon. Exploring my 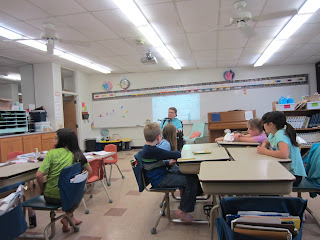 surroundings further, I spotted a large bag of M&Ms propped against a bag of microwave popcorn. I started to wonder if I could prolong my segment of the day so I could join in the festivities.

Ten minutes after I came, the combined 3rd and 4th grade class got off from break and I met the new, to me, instructor. The total class size consisted of eight kids, four per grade. With the small class size and basically as much time as I wanted, I tried adding a new lesson. In addition to having the kids write by mouth, like me, I also had them try writing by foot. It helped demonstrate other disabilities, such as not having arms, and was fun for everyone. The students concluded mouth writing was easier than feet, which was opposite my prediction. 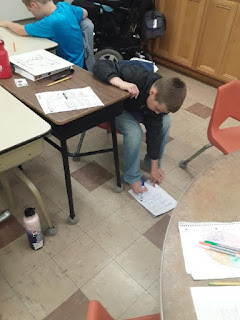 When my caregiver and I got home, we were greeted with a note on the door into the house. While away, my parents got tested for Covid, with mom coming back positive and dad negative. She has suspected something was wrong a few days earlier and as a precaution, had stayed away from me. Since the positive test, mom has been in quarantine in the basement until ten days have passed.

Therefore, it has been dad running the house and helping mom and I on his own. Mom has been directing supper items from her post in the basement and giving directions on how to make the dish. It has looked like dad running around like a masked headless chicken. During the day, I have tried to have my caregivers help where they can to decrease the work load.

Thankfully, I have felt fine and not shown any symptoms of having caught it. For precaution, I will be starting to take a couple extra supplements, zinc and vitamin D, that are supposed to help boost the immune system.

I'm thankful for the blessings of health God has given me in the quad life. I look forward to when mom can be released from her quarantine, but am thankful she doesn't appear to have a severe case. This week will primarily be spent at home, but I hope the sun will come out and allow for time on the deck.