It almost seems like every week, the world is becoming more hostile, especially toward Christians. In Canada, three pastors are in the public spotlight for being arrested or heavily fined for having church services. Life is also seen as just an accident that arose from evolution, and not something to be cherished as a gift from God. Therefore, funding for abortion is now greatly increasing as well as the availability of euthanasia.

No matter what is happening, Jesus said to go into all the world and make disciples of all nation (Matthew 28:18-20). Much of what is going on around us is a symptom of hearts that have turned away from God. Passing laws that restrict evils such as abortion are great, but they can be switched back again in another generation. The only lasting solution is turning hearts, and minds, back to Christ and why life is unique. 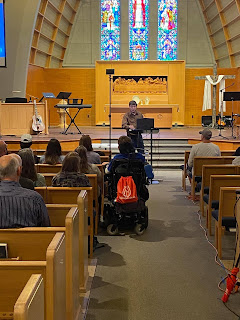 A little over a week ago, I worked with a gospel outreach group at an annual Dutch heritage celebration. I have helped with the group every year (except 2020 of course) since they started in 2017. This year, groups were sent to certain sections of town with one person designated as the group leader. For those that were inexperienced at outreach, they could get training with their leader. Since I have been out for several years, and preach on evangelism, I was designated as one of the leaders.

Every morning started with group training about evangelism basics or apologetics. After the hour long session, we then spread out around town. One of the women in my team was normally content with staying at home and avoiding people. However, after some tips on how to approach people and ideas for conversation starters, she did share gospel tracts and prayed with a few people.

I talked with one man who said he was a Buddhist, but believed because of Jesus' sacrifice on the cross, everyone goes to heaven, even Hitler. I went through a few questions and shared with him, but he wasn't interested in listening. It was still a friendly conversation and I was able to leave a gospel tract with him and I pray he will have a change of mind while he has time.

The quad life doesn't need to be boring with sitting at home all the time. I'm thankful I had this opportunity again this year and hope for more to come.

Labels: giving back, helping others, relying on God